Grown-ups, here’s a story for you: Fix climate before it’s too late.

For years, Botswana was a safe place for Africa’s elephants. But now, its government wants to “manage” the herds by legalizing elephant hunting and rolling out the red carpet for rich tourists with guns. Tell President Mokgweetsi Masisi to keep Botswana a haven for wildlife!

The US military’s Ramstein air base is a frequent source of criticism for the German government, especially when it comes to the operation of weaponized drones. Now the issue has gone to court.

Source: Drones and diplomacy: US Ramstein air base stirs controversy in Germany | Germany| News and in-depth reporting from Berlin and beyond | DW | 14.03.2019

Why Investigators Fear the Two Boeing 737s Crashed for Similar Reasons The planes flew in similar erratic patterns, suggesting to experts that an automated system might have malfunctioned on both flights.

The presence of oral bacteria in so-called cystic pancreatic tumours is associated with the severity of the tumour, researchers report. It is hoped that the results can help to improve diagnosis and treatment of pancreatic cancer.

Penal Code Section 196, enacted in 1872 when California was the nation’s sparsely populated westernmost frontier, declares that a police officer may lawfully kill someone while “arresting persons charged with felony, and who are fleeing from justice or resisting such arrest.”

Similar laws in other states have been overturned by the courts, but California’s remains intact, described in a legislative report as “the single oldest unamended law enforcement use of force statute in the country.”

In practice, it is the basic reason why California’s police officers are almost never prosecuted when they kill someone, even when the circumstances indicate that deadly force was not needed.

Last Saturday, Sacramento County District Attorney Anne-Marie Schubert declared that two police officers who, a year earlier, had fired a barrage of bullets at the shadowy figure of Stephon Clark, will not be prosecuted. The two “acted lawfully under the circumstances,” Schubert said.

Three days later, Attorney General Xavier Becerra agreed, saying, “Based on our review of the facts and evidence, in relation to the law, I’m here to announce today that our investigation has concluded that no criminal charges against the officers involved in the shooting can be sustained.”

It turned out that Clark, a much-troubled young man who had been vandalizing cars in a South Sacramento neighborhood, was wielding a cell phone, not a gun. Moreover, just eight of the 20 rounds fired at Clark hit their target, which meant those other bullets could have easily killed someone in a neighboring home.

Had a civilian done what those two officers did – fired multiple rounds blindly at an indistinct figure in a backyard – he or she would almost certainly be prosecuted, at least for manslaughter if not for murder.

Knowing your target, firing only to protect oneself or another from death or great bodily harm and using minimum force to end the threat are drummed into civilian gun owners during firearms training.

California’s police shoot and kill more people than those of any other state – 162 in 2017 – and, according to a legislative bill analysis, “Of the 15 police departments with the highest per capita rates of police killings in the nation, five are in California: Bakersfield, Stockton, Long Beach, Santa Ana and San Bernardino. Police in Kern County have killed more people per capita than in any other US county.”

The legislative analysis was for Assembly Bill 931, which Assemblywoman Shirley Weber, a San Diego Democrat, carried last year to change the legal standard for police use of deadly force.

Instead of the virtually unlimited legal protection that Penal Code Section 196 and other laws give police, Weber’s bill would allow justified shootings “to defend against a threat of imminent death or serious bodily injury to the officer or to another person,” with few exceptions.

That’s similar to the justified homicide laws governing civilians. Law enforcement organizations bitterly opposed the measure, saying it would put the lives of cops in jeopardy, and Weber’s bill died in the Senate.

She’s back this year with an almost identical measure, Assembly Bill 392, and the Stephon Clark episode, occurring as it did just a few miles from the Capitol, seems to give it a much better chance of passage. Gov. Gavin Newsom and Sacramento Mayor Darrell Steinberg are among those calling for revising California’s use-of-force law.

Police work can be very dangerous, to be certain, and most officers are very reluctant to shoot people. However, we are seeing far too many cases of shoot-first-and-ask-questions-later.

That might have been acceptable in 1872 California. It can’t be in the 21st century.

Dan Walters is an opinion columnist for CALmatters, where this commentary first appeared. 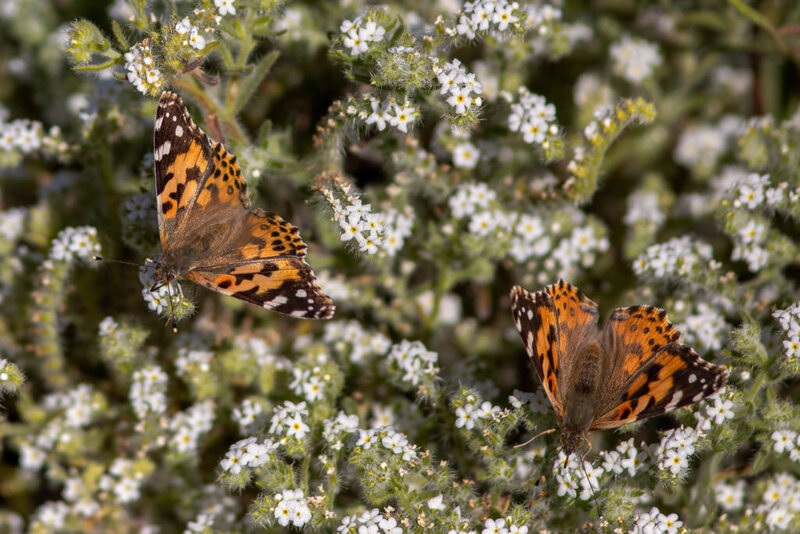 Currently, skies in Southern California look like a scene out of Hitchcock—a little less moody, maybe, and a bit more ethereal. From Burbank to Redondo Beach to South Central Los Angeles and beyond, swarms of butterflies have been flitting throughout the air in a fever dream of irruption and migration. And with the overall numbers of these tiny, two-to-three-inch butterflies, known as painted ladies (Vanessa cardui), appearing to be down in the region (from around 300,000 in 2017 to 25,000 last year, according to one monitoring program), this magical burst of lepidopterans brings both wonder and hope.

The painted lady fluorescence is the result of an unusually rainy winter in California—and in the deserts in particular, which also helped spur this spring’s wildflower superbloom. In a statement, James Danoff-Burg, conservation director of the Living Desert Zoo and Gardens, said “the average annual rainfall in the Coachella Valley is three inches. This year, we had three and a half inches on Valentine’s Day alone.” Art Shapiro, an ecologist at University of California, Davis, who’s been studying butterfly migration since 1972, told CNN that “Painted ladies tend to thrive when there’s a superbloom because there are so many plants for the butterflies to lay their eggs on and for caterpillars to eat.” While these butterflies migrate from Mexico every year, through Southern California’s deserts, to the Pacific Northwest, they usually go relatively undetected because there aren’t quite so many of them.

This year’s phenomenon is referred to as an irruption. “The difference is that a migration is a seasonal occurrence,” says Matthew Shepherd of the Xerces Society, an invertebrate conservation nonprofit based in Portland, Oregon. “An irruption is a sudden and massive surge in population size that doesn’t happen each year. Essentially, there is a super-abundance of something that leads to a population that is so large that the pressure just keeps pushing the butterflies on the edges further and further is search of flowers.”

Another reason the critters are making their way up the coast from Mexico, where they winter in the Sonoran Desert, is because of this crowding. “The pressure of having so many butterflies in one area is forcing them outward,” says Shepherd. “The mass of host plants that the caterpillars eat is as important to this as the availability of nectar to fuel the adults. The butterflies are not so much leaving something behind, but moving in search of plants and areas that aren’t saturated with other painted ladies!” 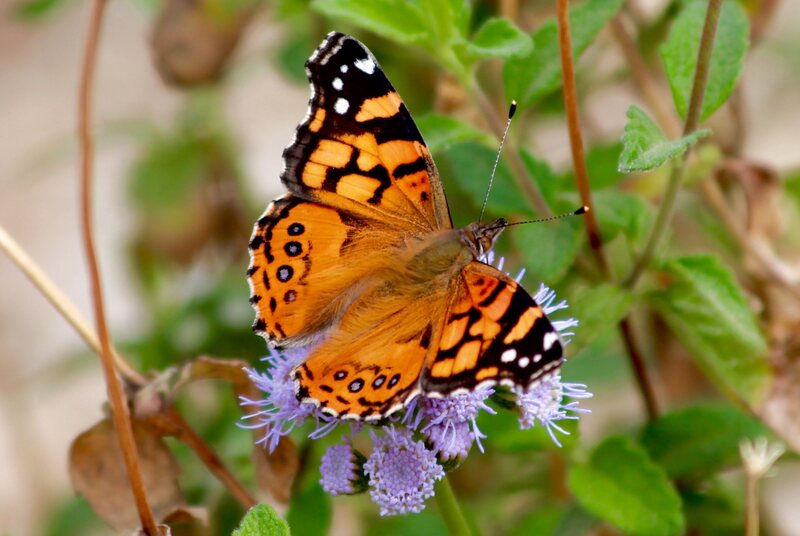 The small insects flitting through California’s vistas are cousins of the larger and more vibrant monarch, which faced critically low population numbers (down 85 percent) in California last year. Both butterflies are similar in color—orange and black with whispers of white—and are essential pollinators of the state’s plants. Tom Merriman, director of the Encinitas-based butterfly nonprofit Butterfly Farms, says that butterflies “can get into flowers bees can’t get to,” and that “monarchs are considered an indicator species that help us judge the condition of our environment.”

According to Merriman, the last time Southern California an event like this was in 2005, an El Niño year. (Then, I-5 was closed in Southern California due to the quantity of dead butterflies on the road surface, Shepherd says.) That wet year, there were estimated to be more than a billion painted ladies. Based on the butterflies that flew through Encinitas just yesterday, Merriman ventures that the region is seeing just as many. “They’re moving pretty quickly and can travel nearly 30 miles per hour and can cover up to 100 miles a day,” Merriman says. Occasionally, the ladies stop to sip nectar from flowers, and then continue their haste.

“Think cars traveling on the freeway, they’re all going the same direction but not really together,” Merriman says. “We think it’s going to go on for a few more weeks. They’re not going to be as dense—some will run out of energy and stop to feed and breed, some will run into predators, or worse, automobiles.”

The painted ladies are expected to stay, wherever they settle down, throughout the summer. Shepherd’s guess is that they’ll arrive in Oregon sometime in April. They’ll make offspring, and the ones flying north now will almost certainly be grandparents by July. For most of them, the Pacific Northwest will be the end of the road. “Painted ladies mostly die where they are at the end of the season,” Shepherd says, because their average life expectancy is two to four weeks. Then their descendants will travel back to Mexico in the fall.

In the first four years after Mayor Bill de Blasio took office, the number of New Yorkers stopped and frisked by police continued the dramatic decline that began the year before, when a federal judge found the practice to be racially discriminatory and ordered police reforms. [ more › ] 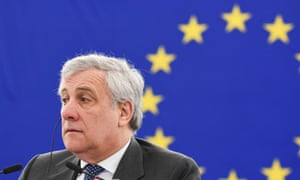 The president of the European parliament is under fire for downplaying the crimes of Benito Mussolini, after he said Italy’s fascist dictator had done positive things for the country.

Antonio Tajani, a close ally of the former Italian prime minister Silvio Berlusconi, told Italian radio that Mussolini had a good track record on developing infrastructure:“I’m not a fascist, I have never been a fascist and I don’t share [Mussolini’s] political thought, but if we must be honest, he built roads, bridges, buildings,” he said. “He reclaimed many parts of our Italy.”