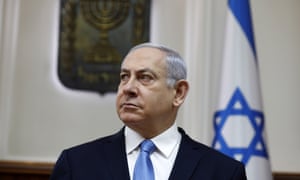 Benjamin Netanyahu has said Israel is “not a state of all its citizens”, in a reference to the country’s Arab population.

In comments on Instagram, the prime minister went on to say all citizens, including Arabs, had equal rights, but he referred to a deeply controversial law passed last year declaring Israel the nation state of the Jewish people.

“To my mind, that may or may not be the best way to address it,” Castro said. “However, it’s interesting to me that when it comes to Medicare for all, health care, you know, the response there has been we need to write a big check, that when it comes to tuition-free or debt-free college, the answer has been we need to write a big check.” “So if the issue is compensating descendants of slaves, I don’t think the argument about writing a big check ought to be the argument you make if you’re making the argument that a big check needs to be written for a whole bunch of other stuff,” Castro continued. “If, under the Constitution, we compensate people because we take their property, why wouldn’t you compensate people who actually were property.”

Source: Julian Castro on Reparations: ‘Why Wouldn’t You Compensate People Who Actually Were Property?’ | 3CHICSPOLITICO

A mild illness, or perhaps even no obvious illness at all, after infection by Ebola virus, could be seen by some as heretical. But new evidence adds to that which already exists, suggesting it really does happen.

Hints that Ebola virus can cause mild or even unnoticeable illness, or that it may circulate unreported, can be found in the scientific literature.[6,7,8]

What do we know about mild infection and Ebola virus?

A big new study has emerged, looking for asymptomatic or “paucisymptomatic” Ebola virus-infected people. To be clearer, the authors are talking those who may have been infected but showed no symptoms or just mild illness. They used the detection of antibodies specific to a Zaire ebolavirus as a marker that they had been infected.

Scientists from France and Guinea enrolled people who had had physical contact with a confirmed case of Ebola virus disease (EVD) in Guinea. None of 1,390 contacts followed, were vaccinated against EVD and none had officially developed EVD during the period between 12th May 2016 and 8th September 2017. Based on their recollection, none had developed symptoms that suggested to them that they had a viral haemorrhagic fever virus infection.

Antibodies in the contacts

The laboratory tests detected antibodies made against three different pieces (antigens) of the Zaire ebolavirus (glycoprotein or nucleoprotein or 40-kDa viral protein), in response to virus infection.[3] The tools had been well evaluated beforehand so the results produced are reliable, an issue with earlier studies of this sort. The scientists considered samples that reacted with at least two of the three antigens as positive for past infection.

The genetic regions encoding the proteins used as antigens in the Zaire ebolavirus lab testing are marked in red. More detail on the method which also seems capable of discriminating between the EBOV, SUDV, BDBV, RESTV species of ebolaviruses.[3]
Click on image to enlarge.

In a very handy approach, the scientists dried blood onto special filter paper. This avoided the need to send away whole blood which doesn’t store for long without separation and freezing. These dried blood spots (DBS) store well and can be shipped easily. Apparently, they can also be used to detect antibodies once the DBS is reconstituted and heat inactivated.[3]

There were signs of previous infection, but no severe disease

30 of the 216 (14%) had a fever plus three other symptoms; more than enough for them to have been classified as suspected EVD cases according to the World Health Organization case definition. But it seems they were not classified as such. Because of that, they were not tested at the time. Interestingly, this study already defines these people as contacts, so a sudden fever alone should have resulted in most of them being reported to a surveillance team.

World Health Organization case definition of a suspected case during an ongoing outbreak of Ebola or Marburg virus diseases.
Source: WHO [5]

It mattered what sort of exposure people had

More of those with symptoms of illness had contact with a fatal EVD case (45 of 99 or 45%) than did those with no symptoms 67/280 or 24%). Those with contact with blood or vomit from a case or who took part in a burial ritual were also more likely to have become symptomatic.

Among those who were asymptomatic but had been infected, there was a greater likelihood that they had taken part in a burial ritual or had contact with infectious fluids than asymptomatic contacts with no developmentt of antibiodies.

Why do some get exposed and feel nothing while others die from the experience?

Another interesting question to come out of this study is whether there is a role for exposure outside of contact with a known case of EVD.

Did some number of these contacts already have antibodies to a Zaire ebolavirus strain or to another ebolavirus that we already know about, or a strain or virus we’ve yet to find? Could those infections have provided some protection (cross-protection) against illness during this new ebolavirus contact? Of course, that also generates the question of why don’t they notice those infections if this is all possible?

We do know that Zaire ebolavirus was in Guinea before the multi-country outbreak that started there, took over lives in 2013-2016.[6]

Where does that leave us?

This study showed us that contacts of a EVD case sometimes became infected even if they didn’t notice anything, or only had a short-term illness after that contact. Those in contact with infectious materials (fluids or a body) were more likely to have symptoms. Even in the absence of symptoms though, evidence that infection occurs is solid. This will surprise some. But not others.

We should keep this in mind about previous studies, but also, it may be that these latest findings mean earlier findings might have been correct after all.

Having said that, this latest finding using this excellent and target-specific lab tool reinforces the need for even more study and better understanding of what is happening in less deadly Ebola virus infections. Some questions that need answering include:

This study is a very nice reminder that we need to keep our minds open to new – and sometimes ‘out there’ concepts. We can talk about ideas on the edge of what existing data support as much as we like. Actual science being funded and done is what resolves these thoughts into hypotheses that lead to data and new hypotheses and more data. And so on.

The post Home. It’s where the viruses spread. appeared first on Virology Down Under.

The foreign secretary has said it was too dangerous to send British officials to rescue Shamima Begum’s baby son from Syria, and she knew she would not be able to rely on British consular assistance when she went to Isis-held territory.

Jeremy Hunt, in referring to the 19-year-old who was stripped of her citizenship on the orders of the home secretary, Sajid Javid, gave the first reaction by a senior government figure since it emerged that Begum’s son had died in a Syrian camp.

Weeks after a documentary exposing injustices at a South Florida for-profit immigration detention center debuted at a national film festival, Claudio Rojas— the film’s inside source— was arrested by U.S. Immigration and Customs Enforcement in Miramar during his annual visa check-in, records show. The film, “The Infiltrators,” also will premiere at the Miami Film Festival on Tuesday and Wednesday at the Silverspot Cinema. Rojas was planning to attend. Records show Rojas remained detained at Krome detention center in South Miami-Dade as of Sunday. His attorneys say he was apprehended Wednesday without cause and is now facing immediate deportation.