wtf A woman and her daughter flee persecution in Honduras. Despite identical circumstances, the mother is granted entry, while her daughter is deported. And there is little to be done about it.

Spain made world headlines last year when it staged a general strike on March 8, International Women’s Day. Around 5.3 million women observed the walkout, according to the unions, while hundreds of thousands of people joined marches on the streets of 120 Spanish cities that day. 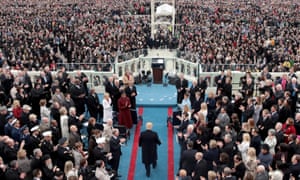 Creators of firms that donated revealed by Guardian as Indian financier, lobbyist with links to Taiwan and Israeli real estate developer

Donald Trump’s inauguration received tens of thousands of dollars from shell companies that masked the involvement of a foreign contributor or others with foreign ties.

The Guardian has identified the creators of three obscure firms that contributed money to Trump’s inaugural committee, which collected a record $107m as he entered the White House in 2017.