Young woman who admitted she falsely claimed rape by 3 black men not charged. Still no equal justice for all. The actor on the television series “Empire” faces 16 counts of disorderly conduct after a grand jury handed up indictments dated Thursday.

Clinic visits for flulike illness drop a bit, but other major indicators rise.

After Lesko, who seemed to share Beck’s concerns about trans people, described them as men “pretending” to be women, Rep. David Cicilline (D-RI) interrupted and said, “I think the suggestion that transgender individuals are pretending they are of a different gender is deeply offensive.” Ruth Glenn, president and CEO of the National Coalition Against Domestic Violence (NCADV), said Thursday’s testimony was “very critical” to the reauthorization of VAWA and called Beck’s testimony “shocking.” “I will say that I know what she was doing there. That was to offer a different opinion. Unfortunately, her opinion is not based in fact,” Glenn said. “And it was very hurtful to hear what she had to say about a community that is disproportionately experiencing violence, whether it’s sexual violence or domestic violence.”

Turkish police fired tear gas to break up a crowd of several thousand women who gathered in central Istanbul on Friday evening for a march to celebrate International Women’s Day, Reuters witnesses said.

Dump Trump! Trump administration officials have not made any new plans to send a team to China for face-to-face trade talks although there is much work left to be done to reach a deal, White House trade adviser Clete Willems said on Friday.

She nearly became Georgia’s governor. She might run for senator or president. But she’d probably trade it all for the bridge on the Enterprise. 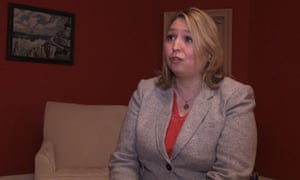 Brexit has created many nightmares, but a particularly unpleasant one is the rise of anti-English sentiment in Ireland. British-Irish relations have not just cooled on a diplomatic and political level, but among the Irish population. The anti-Englishness born of past oppression had, we thought, been confined to the past but has resurfaced. And whose fault is that? The emotional trauma of Ireland’s treatment by Britain, and England in particular, is usually delicately contained but now it is spilling over.

I grew up in Dublin, far removed from the conflict north of the border but I went to an Irish-speaking secondary school, where boys wore balaclavas to school Gaelic football matches for a laugh, and “IRA” was carved into desks with maths compasses. As the painful peace process concluded, and the Good Friday agreement came into force, God Save the Queen was sung in Croke Park, the hallowed ground of Gaelic sports, and the Queen spoke in Irish at a state dinner in Dublin Castle. It seemed as if anti-British sentiment was at least covered over with a healing gauze if not completely healed. But Brexit, and the behaviour and rhetoric of British politicians, the tone of the trightwing British press, and the constant stream of ignorance about our island from across the Irish Sea, has ripped that bandage off. Everything is exposed now, and it’s a wound that has been, and can be again, mortal.

Today’s threat to the truth also comes from a social media whose algorithms prefer virality to veracity, where lies spread faster than facts. It comes from ideologues happy to dismiss overwhelming scientific evidence, whether on climate change or the safety of vaccination, as breezily as those who once insisted that the Earth was flat. It comes from a technology now so advanced that it can create false evidence, in the form of deepfake video, audio and text.

“The boy required 57 days of inpatient acute care, including 47 days in the intensive care unit. The inpatient charges totaled $811,929 (excluding air transportation, inpatient rehabilitation, and ambulatory follow-up costs). One month after inpatient rehabilitation, he returned to all normal activities, including running and bicycling. Despite extensive review of the risks and benefits of tetanus vaccination by physicians, the family declined the second dose of DTaP and any other recommended immunizations.”

Source: Inoreader – An Unvaccinated Child in Oregon Recently Had Tetanus

The city’s Department of Health had issued an order requiring schools to prohibit unvaccinated students from attending. A yeshiva in Brooklyn ignored it.