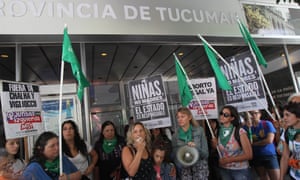 The lives of thousands of girls in Argentina are being put at risk as legal abortions are delayed and obstructed by doctors trying to force pregnancies to full term.

The issue of anti-choice doctors, medical institutions and government officials deliberately trying to hold up legally sanctioned terminations was brought into sharp focus last week when it emerged that an 11-year-old girl’s baby was born alive because health officials delayed her request for an abortion. The girl had fallen pregnant after being raped by her grandmother’s boyfriend.