The Movement for Black Lives comes out in support of Black progressive leaders such as Ilhan Omar, Angela Davis, and Marc Lamont Hill, who have been targeted for speaking out in favor of Palestinian rights.

The Movement for Black Lives (M4BL), a coalition of more than 50 organizations representing black Americans, this week came out strongly in support of Black progressive leaders who have spoken out in favor of Palestinian rights and defending them against charges of anti-Semitism they have faced as a result.

Charges of anti-Semitism against progressive black Americans, the movement said in a statement, have been “leveled to silence criticism of the Israeli government, to regulate behavior and to try and mute independent Black political voices that are connected to communities across the country and abroad.”

The last few years have seen an increasing number of prominent Black Americans openly criticizing the policies of the Israeli government. In recent months, that criticism has exacted a price, with American pro-Israel groups accusing figures such as Angela Davis, Michelle Alexander, Marc Lamont Hill, and recently Congresswoman Ilhan Omar, of anti-Semitism.

For Davis, her support for BDS led to a prestigious civil rights award being rescinded following pressure by pro-Israel groups (the decision was later annulled, following backlash). For Hill, espousing freedom and equality for Israelis and Palestinians alike meant losing his job as a CNN commentator. For Omar, it meant facing the wrath of one of the most powerful lobbies in the United States.

“We categorically reject the erroneous assumption that all criticism of the Israeli government is anti-Semitic,” continued the statement. “This strategy, that has included things like firings and public character assassinations of leaders, is intended to undermine, censor and silence Black leadership, while ignoring our movement’s history of internationalism, particularly our consistent condemnation of all forms of anti-Semitism.”

The attacks, which M4BL likened to the McCarthyist witch-hunts of the 1950s, are part of the right’s attempts to distort the “history of anti-Jewish violence and oppression, then use this misrepresentation as a tool to promote a right-wing nationalist agenda — at home and abroad,”it said.

“[The] long-standing aversion to Black leaders expressing views on foreign policy persists today because of anti-Black racism and a fear of solidarity across movements in this country and abroad,” the statement continued.

This is not the first time M4BL has spoken out on issues relating to Palestinian human rights. In 2016, the movement published a comprehensive platform that addresses the systemic racism and violence faced by Black communities.

The platform also demanded the U.S. government cut foreign aid to Israel, among other human rights abusers, and redirect it toward “domestic infrastructure and social programs to meet the needs of Black people and working-class communities within the U.S.”

The movement was heavily criticized at the time for claiming that the United States government, through its funding of the Israeli military and arms industry, “is complicit in the genocide taking place against the Palestinian people.”

US president Donald Trump has argued with his US trade chief during a televised trade meeting. When asked a question about trade talks with China, which have been taking place over the weekend, Donald Trump said he is against using memoranda of understanding [MOUs]. ‘I don’t like MOUs because they don’t mean anything. To me they don’t mean anything,’ Trump said. Robert Lighthizer jumped in to explain that an ‘MOU is a contract … a binding agreement between two people’. To which a gruff Trump replied, ‘I disagree.’  Lighthizer got the message, adding ’from now on we’re not using the word Memorandum of Understanding anymore. We’re going to use the term trade agreement, all right?’ 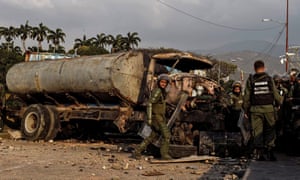 Spain has warned that it will not back any military intervention in Venezuela after the South American country’s opposition leader, Juan Guaidó, urged other nations to consider “all options” to remove the president, Nicolás Maduro, from power.

Guaidó is due to meet the US vice-president, Mike Pence, in Colombia on Monday amid ongoing speculation that the Trump administration could use force to oust Maduro. 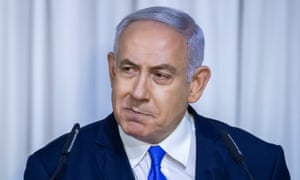 Benjamin Netanyahu’s decision to enter an electoral pact with a party of ultranationalist extremists has drawn rare criticism from an influential pro-Israel group in the US.

The American Israel Public Affairs Committee (Aipac), which has generally given unflinching support to the Israeli leader during his 13 years in power, called the Jewish Power party “racist and reprehensible”. 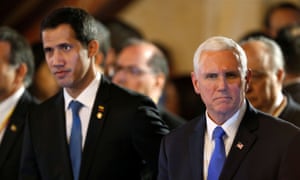 US vice-president Mike Pence has repeated a veiled threat of military intervention in Venezuela, but Washington appeared increasingly isolated in its willingness to contemplate using force to oust President Nicolás Maduro.

Both European powers and some of Donald Trump’s key Latin American allies – all of whom have recognised opposition leader Juan Guaido as Venezuela’s legitimate leader – warned that they would oppose sending troops into the country.

An increasingly desperate Israeli prime minister has aggravated already fraught relations between Israel and Jews in the diaspora.

Big news! Well not so big right now because our Dear Leader is about to go to Vietnam and meet with Lil Kim of North Korea…..but the battle in Venezuela rages on.

The US-sponsored coup in Venezuela, still ongoing as I write, is the latest chapter in the long and bloody history of US imperialism in Latin America. This basic fact, understood by most across the left of the political spectrum – including even the chattering liberal class which acknowledges this truth only with the passage of time and never in the moment – must undergird any analysis of the situation in Venezuela today. That is to say, the country is being targeted by the Yanqui Empire.

This point is, or at least should be, indisputable irrespective of…