In the state of Israel’s early years, a number of parents in immigrant transit camps were told that their babies had died. Their families believe the babies were abducted by the Israeli authorities in the 1950s, and were illegally put up for adoption to childless Ashkenazi families, Jews of European descent. A younger generation is demanding answers.

Ms. Muthana’s father was a Yemeni diplomat, and children born in the United States to active diplomats are not bestowed birthright citizenship, since diplomats are under the jurisdiction of their home countries. That law does not apply in Ms. Muthana’s case, said Charlie Swift, the director of the Constitutional Law Center for Muslims in America, who is representing her family. Ms. Muthana, he said, was born a month after her father was discharged from his position as a United Nations diplomat. After she joined the Islamic State, Mr. Swift said, Ms. Muthana’s family received a letter indicating that her passport had been revoked. Her father sent the government evidence of his nondiplomatic status at the time of his daughter’s birth, but did not receive a response. Mr. Swift said Ms. Muthana had in fact been issued two American passports: one when she was a child, and a renewal she applied for herself just before leaving for Syria. In the case of the first, he says that her father provided a letter from the United Nations proving that he had been discharged, to overcome the jurisdictional challenge. Hassan Shibly, a lawyer with the Council on American-Islamic Relations Florida w

A cache of weapons was recovered from the home of Christopher P. Hasson, a Coast Guard lieutenant and self-described white nationalist. A court filing called him a domestic terrorist. 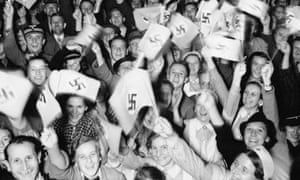 Since the second world war, there have been three generations of Germans living in peace. That peace is taken for granted

Until his death in the early 1990s, my grandad was a committed Nazi. Most of his elder brothers died in one night at the battle of the Hartmannsweilerkopf in the first world war. In a bitterly traumatised interwar Germany, defined by hatred against foreigners, Jews and democracy as well as delusions of national grandeur, he was unemployed for most of the 1920s. He joined the Nazi party early, and volunteered to fight in 1940. He became a staff sergeant in the Wehrmacht and led a so-called “anti-partisan” unit on the eastern front, and participated in the capture of Kiev.

Related: The EU is under attack from the far right. Here’s how I learned to defend it | Schams El Ghoneimi 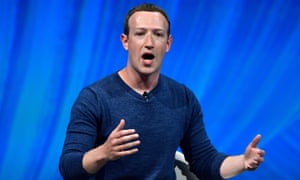 As site grapples with flood of fake news, former Snopes editor says CEO’s crowdsourcing comments show he has ‘learned nothing’

Facebook chief executive Mark Zuckerberg revealed that he is considering crowdsourcing as a new model for Facebook’s third-party factchecking partnerships.

In the first of a series of public conversations, Zuckerberg praised the efforts of factcheckers who partnered with Facebook following the 2016 presidential election as a bulwark against the flood of misinformation and fake news that was overtaking the site’s News Feed. 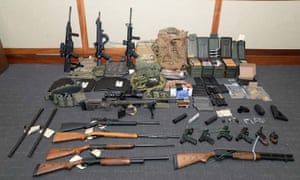 A neo-Nazi serving as a lieutenant in the US coast guard has been caught plotting to attack Democratic members of Congress, including congresswoman Alexandria Ocasio-Cortez, and well-known media personalities, according to prosecutors.

Christopher Hasson intended “to murder innocent civilians on a scale rarely seen in this country,” according to a filing to federal court in Maryland. Law enforcement officers seized 15 guns and 1,000 rounds of ammunition from his home.

Donald Trump’s administration rushed to reach a deal to provide Saudi Arabia and its despotic government with protected U.S. nuclear technology, despite numerous legal and ethical warnings that such a deal was ill-advised and possibly in violation of the law, Democrats in the House of Representatives alleged in a…

Christopher Paul Hasson called for “focused violence” to “establish a white homeland” and said, “I am dreaming of a way to kill almost every last person on the earth,” in one of his letters that contemplated launching a biological plague, according to court records filed in U.S. District Court in Maryland. Though court documents do not detail a specific planned date for an attack, the government said he had been amassing supplies and weapons since at least 2017, developed a spreadsheet of targets that included House Speaker Nancy Pelosi (D-Calif.) and searched the Internet using phrases such as “best place in dc to see congress people” and “are supreme court justices protected.” “The defendant intends to murder innocent civilians on a scale rarely seen in this country,” the government said in court documents filed this week, arguing that Hasson should stay in jail awaiting trial.

Source: ‘I am dreaming of a way to kill almost every last person on earth’: A self-proclaimed white nationalist planned a mass terrorist attack, the government says – The Washington Post

Great piece by Margaret Sullivan on CNN hiring a political operative with no actual experience or expertise in journalism as a political editor:

A few months before the 2016 presidential election, Sarah Isgur tweeted some advice to Donald Trump: “The only 3 words that should be coming out of Donald Trump’s mouth this week are: ‘Clinton’ ‘foundation’ ‘emails.’ ”

But that kind of helpful counsel wasn’t enough.

In early 2017, Isgur was summoned to meet with President Trump in the Oval Office, where she needed to pledge her loyalty to be named the Justice Department’s spokeswoman by Attorney General Jeff Sessions.

Now CNN has hired Isgur — who has no journalism experience and once slammed her new employer as the “Clinton News Network” — as a political editor.

The network, under heavy fire for the move, was insisting by Tuesday night that she wouldn’t be directing political coverage, although that surely is what a political editor might be expected to do.

Isgur is helping to “coordinate coverage across TV and Digital,” a spokesman told Vox, and will be “making sure that stories are featured on the right shows and articles get posted online at the right time.”

But why CNN made this move to begin with is the deeper and more troubling question.

It strongly suggests that the network’s big thinkers — including head honcho Jeff Zucker — are aiming for a kind of false fairness: a defensive, both-sides-are-equal kind of political coverage that inevitably fails to serve the voting public.

This approach is not guided by what’s good for citizens, but by a ratings-first effort to position the network in the middle of Fox News Channel on the right and MSNBC on the left.

At a time when so many talented and experienced journalists are out of work because of layoffs in a teetering industry, this makes even less sense. There are countless better choices out there.

Far from being reformed from a time when it aired Trump rallies live during the 2016 primary season and let the candidate call in by phone to comment on this and that, CNN seems to be doubling down on a ratings-first, fair-in-name-only approach to politics.

That’s a shame and — as an extraordinarily consequential election approaches — it’s dangerous.

To its credit, CNN has plenty of high-performing reporters and editors.

What it lacks is a public-spirited mission, articulated at the highest level and backed up with every hire and decision.

And one of the highest-paid “journalists” at CNN is the guy who wrote more than 50 stories about Clinton’s email server before the first Democratic primary debate in 2015.

It’s also worth noting that the Times simply eliminated Sullivan’s old position, because questions like “should coverage decisions be based in innumerate assumptions that one candidate is guaranteed to win and should be treated as the president-elect?” are ones the paper’s editors don’t believe should even be asked.