Our nation has serious crises that lead to the deaths of tens of thousands of people each year.

Innocent people are dying and we’re not doing enough to help prevent those deaths.

Americans are dying in increasing numbers each year yet there is no presidential declaration of an emergency in any of those cases.

During last week’s State of the Union address, President Donald Trump instead focused his attention on fighting illegal immigration with his long-promised border wall, falsely claiming that tens of thousands of Americans have died at the hands of undocumented immigrants.

For weeks, Trump has decried a national emergency at the border, and has alarmed people by claiming that 63,000 Americans have been killed by undocumented immigrants since the September 11th terrorist attacking in 2001.

That dubious claim has been debunked by various groups that study homicide statistics but that clearly doesn’t stop the President from repeating it. There is no evidence of any such number of deaths attributed to undocumented immigrants.

Yes, that’s 51 too many, but we must look at them in context.

During the same period, 3,776 people died by suicide in Texas, 3,356 people died from gun related deaths, and 2,979 people overdosed. Where’s the outcry about those deaths.

And of those people in the country illegally, most arrived legally on visas or passports and simply overstayed their legal visit, not by running across an unprotected border, so a border wall or fence would not have stopped them anyway.

Illegal border crossings at near historic lows. Since 1971, we have had more than 15 years with more illegal crossings that this past year.

So what’s the crisis at the border?

The “crisis” is manmade, engineered by Trump to create a powerful political issue. It’s true that caravans of migrants have and continue to make their way toward our border, but that’s been happening for years. And when they arrive, some seek asylum through the legal process, some return home, and some do attempt to cross the border illegally.

But that’s not a crisis, it’s reality of living on the border with the world’s wealthiest country aligned next to a still developing nation.

We have border walls, fences, double fences, barbed wire, and over 20,000 Border Patrol agents on the border now, along with military personal deployed by Trump last year.

No doubt, there are issues at the border that can be addressed with more physical barriers, technology, and personnel, but a national emergency it is not. And spending $5 billion and up to $30 billion on a wall, or barrier, or fence, is not the answer.

Immigration, both legal and illegal, must be dealt with in a comprehensive way that will allow families to stay intact, allow young adults and children brought here as minor to have a sensible path to citizenship, and allow employers to continue providing good paying jobs to hard working immigrants that want to achieve their own American dream. That’s real immigration reform.

We should also be unified in attacking the causes of gun violence that kill thousands each year, including children.

We should be addressing the mental health issues that lead thousands each year to take their own lives, including military veterans returning from service.

We should be fighting the epidemic of prescription drug overdoses that is claiming the lives of fathers, mothers, and children that have gotten hooked on drugs that were intended to help heal, not kill.

If President Trump is truly serious about protecting Americans, and he’s willing to shut down the government to get his way, he should be boldly leading us toward an America where we are safe from gun violence, protected from dangerous drugs, and healthy enough to want to live our lives, not take them ourselves.

That would make American great again.

A border fence? No, thanks, we already have that.

We have seen Trump’s fear-mongering before. There are real humanitarian problems at the border, but they have largely been manufactured by the Trump Administration, for example, by blocking asylum seekers from entering at ports of entry and lodging claims. Processing increasing numbers of children and families seeking asylum is not a crisis; it is not only manageable but a responsibility any country should willingly bear.

U.S. Special Counsel Robert Mueller disclosed for the first time on Friday that his office has evidence of communications between Roger Stone, a longtime adviser to President Donald Trump, and WikiLeaks related to the release of hacked Democratic Party emails.

Because Modi wants to use violence to get re-elected! The militant attack in India-ruled Kashmir has once again put New Delhi and Islamabad on a war footing. Analysts at the Munich Security Conference say it is a setback to those who wish to see lasting peace in the region.

It’s not an emergency? He just wants to break Constitution to do it faster! Traitor 1st class!

Saying there’s “an invasion of drugs, invasion of gangs, invasion of people” at the southern border, US President Donald Trump makes official his declaration of a national emergency to secure funding for his border wall.

The A.C.L.U. sued Customs and Border Protection after an agent told two women last year he was asking for their IDs because they spoke Spanish.

The disclosure is the latest to come from the Catholic Church in recent months, and is one of the largest from an individual diocese.

The president plans to manage the border crisis from the golf course at Mar-a-Lago this weekend.

Selnick is a prominent critic of the VA’s government-run health system. In between his time in government, he has worked for Concerned Veterans for America, a political group funded by conservative billionaires Charles and David Koch that has advocated for expanding private care for veterans. In 2016, Selnick signed onto a report that called the VA “seriously broken” with “no efficient path to repair it” and proposed shifting all veterans to the private sector.

Source: The VA Is Paying for a Top Official’s Cross-Country… — ProPublica 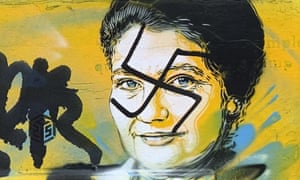 Antisemitism is rising sharply across Europe, experts have said, as France reported a 74% increase in the number of offences against Jews last year and Germany said the number of violent antisemitic attacks had surged by more than 60%.

Related: Hungary tells UK Jewish group to ‘mind its own business’ over antisemitism