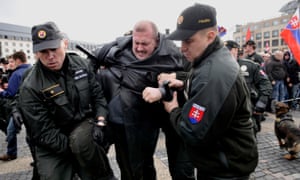 In 2013, the far-right politician Marian Kotleba won a shock victory in regional elections. Four years later, he was voted out in a landslide. But now he’s running for president. By Shaun Walker

More from this series: The new populism

In December 2013, Marian Kotleba, a former secondary school teacher who had become Slovakia’s most notorious political extremist, arrived to begin work at his new office – the governor’s mansion in Banská Bystrica, the country’s sixth-largest city. Kotleba venerated Slovakia’s wartime Nazi puppet state, and liked to dress up in the uniforms of its shock troops, who had helped to round up thousands of Jews during the Holocaust. Now, in the biggest electoral shock anyone could remember in the two decades since Slovakia’s independence, the people of Banská Bystrica and the surrounding region had voted for the 37-year-old Kotleba to be their governor. The four-storey mansion, with its vaulted ceilings and gilded pillars, would be his workplace for the next four years.

Banská Bystrica is a tranquil kind of place, with a genteel Mitteleuropa charm: the centre has pavement cafes, neat rows of burgher houses and a number of handsome baroque churches. At eight minutes to every hour, a clock in the central square plays a dainty jewellery-box jingle. And now, it had the dubious distinction of being the first place in modern Europe to have elected a person widely regarded as a neo-fascist to a major office.