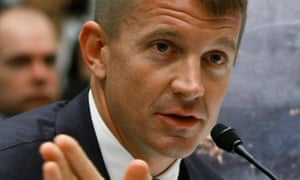 A Hong Kong-listed security firm founded by Erik Prince has signed a preliminary deal with authorities in China to build a training centre in Xinjiang, where Uighur Muslims have experienced a huge security crackdown.

Frontier Services Group, which specialises in providing security and logistics for businesses operating in risky regions, said it had signed a deal to run a training base in the city of Kashgar, according to a statement posted on its Chinese website.

the Turkish army is a mess. Most of its best officers and even pilots have been in prison since the failed coup attempt in 2016, and it’s now being run by commanders chosen by political loyalty instead of competence. Rojava’s defenders, in contrast, are seasoned veterans. In a fair fight, they would have no more problem fending off a Turkish incursion than they had driving back Turkish-backed Jihadis in the past. A “fair fight” in this case would mean having access to anti-tank and anti-air weapons. But this is precisely what the Trump administration promised Turkey it would not let the Kurds have. Even those forces directly working with the US and British troops to defeat Islamic State were never to receive the defensive weapons needed to fend off the Turkish air and armored assault that would inevitably follow – which, if Afrin is anything to go by, may be backed by napalm and cluster bombs. The moment those forces are withdrawn, however, their former allies will be sitting ducks, unable to defend themselves against the advanced weaponry that Britain and the US themselves help provide to Turkey and maintain.

He thinks nuclear rms talks are the same as trying to rescue one of his sinking casinos? 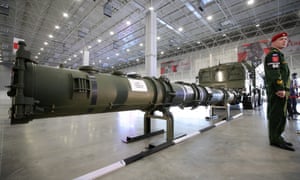 Donald Trump has confirmed that the US is leaving the Intermediate-range Nuclear Forces (INF) treaty, saying “we will move forward with developing our own military response options” to Russia’s suspect missile.

In a written statement, Trump said that the US would be suspending its compliance with the 1987 treaty on Saturday, and would serve formal notice that it would withdraw altogether in six months. 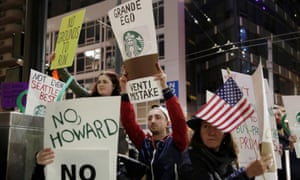 When the former Starbucks CEO Howard Schultz held an event promoting his new book in his home town of Seattle on Thursday evening, his audience was greeted by dozens of protesters holding signs decorated with coffee cups and chanting: “Pick a party.”

This bill was referred to the Senate Committee on Foreign Relations which will consider it before sending it to the Senate floor for consideration.

Legislation Coming Up: This bill has been added to the House’s schedule for the coming week, according to the House Majority Leader. More information can be found at http://bit.ly/2g091ss.

Last Action: This bill is in the first stage of the legislative process. It was introduced into Congress on January 30, 2019. It will typically be considered by committee next before it is possibly sent on to the House or Senate as a whole.

Modi and Trump are alike in how they lie about what they think will make them look good.

On Tuesday, Prime Minister Modi gave tips to students about coping with exams but, as it turns out, marks have not been his friend as the week progressed. In fact, maths has not been his friend at all. On Thursday, January 31, there was widespread uproar over the Business Standard scoop revealing that India’s unemployment rate is at a 45-year-high. The data comes from a NSSO survey that has been vetted by the National Statistical Commission but not yet released by the government. The scale of the outrage around the jobs data has muted another other set of disorienting numbers that have come straight from the prime minister this week – this time about rape.

According to an ANI report, on Wednesday the PM said at a youth conclave in Surat that, “There used to be rapes in this country earlier too, it is a shame that we still hear about such cases. Now, culprits are hanged within 3 days, 7 days, 11 days & a month. Steps are being taken continuously to get daughters justice & results are evident.” These are three astonishing sentences to emerge from the PM, because no part of them is true, and no part is something that a responsible adult should make.

Let’s go to the numbers first. So culprits are being hanged within three days, and so on. One could ask: three days of what? Within three days of the crime or three days of conviction? Within a month of the crime or a month after conviction? Because the fact is that conviction rates for rapes stood at a measly 25 percent in 2016. And which leaves out the thousands of rape cases which are pending investigation, or those pending in the courts (118,537 at the beginning of 2016, according to this detailed report). Just to be clear, the optimistic timeframe for fast-track courts clearing a rape case is also at a much longer two months.

All of this ‘numbers’ discussion leaves out the long and brutal process through which women try to report sexual assault to the police. And all the ways in which marginalized women are further marginalized when they attempt to report sexual assault. And what happens when the political establishment has some stakes in keeping the accused out of jail? But we are doing maths, no?

This three days, seven days, 30 days remark—which sounds like what a call centre might tell you about when your Internet connection will be restored—is scandalous in itself. But no thoughtful person interested in the nature of justice should be making throwaway remarks about capital punishment, no matter their ideological position on the subject. Even without getting into the facts about how capital punishment is no deterrent to sexual assault anywhere in the world, and has been shown to actually further cause underreporting of the crime.

But if we stick to Modi’s numbers, here is the most basic #fail. While hundreds of Indians have been sentenced to death (162 death sentences were imposed by trial courts just in 2018, the highest number in a calendar year since 2000 according to the NLU Delhi’s Centre on The Death Penalty), only four have been executed in the last 13 years. The last time India carried out an execution was four years ago—in 2015, Yakub Memon was hanged for his role in the 1993 Mumbai bombings. So, really, what on earth was Modi saying in Surat? I guess that’s what you call a Big Lie.

Let’s go to the part of “steps are being taken continuously to get daughters justice & results are evident.” I don’t know what these steps for whose daughters are. Is it the eponymous daughters of the Beti Bachao, Beti Padhao Yojana which was supposed to ‘change mindsets regarding the girl child’? Recent reports have actually shown that “56 percent of the funds allocated under the ‘Beti Bachao Beti Padhao’ scheme from 2014-15 to 2018-19, were spent on media-related activities. In contrast to this, less than 25 percent of the funds were disbursed to districts and states. Over 19 percent of the funds weren’t released by the government in the first place.”

Which brings us to “results”, which presumably means either a drop in sexual assault or a rise in convictions. Since convictions are where they are, let us turn to the possibility that there has been a drop in sexual assaults due to the mysterious “steps”. Once more, you would be stymied here because it turns out that we don’t have the data here—the last National Crime Records Bureau report from 2017 has actually not been published. This is the first time since 1953 that the report has not been published.

Clearly this is not someone to vote for if you are invested in the facts about crimes against women.