“I still do not know what I was arrested for, I was only told that I am dangerous,” Jarrar said during a reception in Ramallah on Thursday afternoon. “This is what we have always said when it comes to administrative detention — that it’s arbitrary. That it’s always political. Therefore we demand to put an end to this illegal practice.” The US President claims all IS territory in Syria has been retaken. However, the US-backed SDF alliance maintains it will take another week before a complete victory.

Too many representatives chose to bloviate instead of interrogate — except for one. 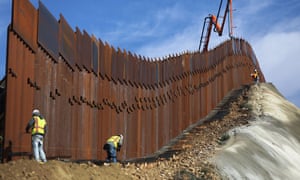 From the 80s onwards, the borderlands were rife with paramilitary cruelty and racism. But the president’s rhetoric has thrown fuel on the fire. By Greg Grandin

No myth in American history has been more powerful, more invoked by more presidents, than that of pioneers advancing across the frontier – a word that in the United States came to mean less a place than a state of mind, an imagined gateway into the future. No writer is more associated with the idea of the frontier than Frederick Jackson Turner, who, in the late 1800s, argued that the expansion of settlement across a frontier of “free land” created a uniquely American form of political equality, a vibrant, forward-looking individualism. Onward, and then onward again. There were lulls, doubts, dissents and counter-movements. But the expansionist imperative has remained constant, in one version or another, for centuries. As Woodrow Wilson, who before he was president was a colleague of Turner, said: “A frontier people always in our van, is, so far, the central and determining fact of our national history. There was no thought,” Wilson said, “of drawing back.”

So far. The poetry stopped on 16 June 2015, when Donald Trump announced his presidential campaign by standing Turner on his head. “I will build a great wall,” Trump said. 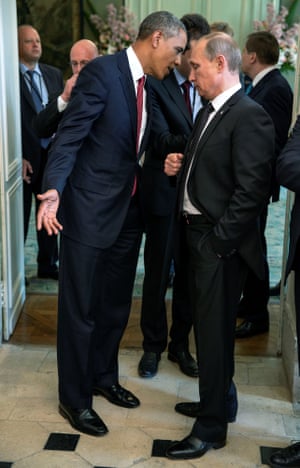 ‘Trump acts as if Russia is our best friend. But it’s our adversary. And this is how you should talk to an adversary’

I wasn’t supposed to be here for this picture. It was taken on the 70th anniversary of the Normandy landings – all the heads of state had gathered there and were coming out of an impromptu luncheon. The official photographers from each country had been kicked out – we were all supposed to leave the building. But I have a knack of making myself small and sticking around.

The shot shows the kind of interaction President Obama had with President Putin during his tenure. It was 2014, a particularly tense time between the two countries. You can see in the facial expressions and gestures that this was a very serious conversation. There are interpreters stood behind them, but I get the impression from Putin’s face that he understood exactly what was being said in English. 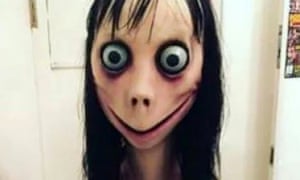 Groups say no evidence yet of self-harm from craze, but resulting hysteria poses a risk

It is the most talked about viral scare story of the year so far, blamed for child suicides and violent attacks – but experts and charities have warned that the “Momo challenge” is nothing but a “moral panic” spread by adults.

Warnings about the supposed Momo challenge suggest that children are being encouraged to kill themselves or commit violent acts after receiving messages on messaging service WhatsApp from users with a profile picture of a distorted image of woman with bulging eyes. 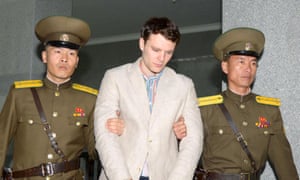 Donald Trump has said he took Kim Jong-un “at his word” when he denied any responsibility in the imprisonment and torture of Otto Warmbier that led to the US student’s death in 2017.

“Some really bad things happened to Otto,” Trump said. “But Kim tells me that he didn’t know about it and I will take him at his word.”

Kass is only the latest pro-vaccine health practitioner to be subjected to an online harassment campaign by anti-vaxxers. Networks of closed Facebook groups with tens of thousands of members have become staging grounds for campaigns that victims say are intended to silence and intimidate pro-vaccine voices on social media. The harassment only exacerbates an online ecosystem rife with anti-vaccine misinformation, thanks in part to Facebook’s recommendation algorithms and targeted advertising. “Their goal is to tell my patients what a bad person I am so I lose business,” Kass told the Guardian by phone, five days into his ordeal. “It’s made me reluctant to engage online.”

“What we’re going to do is take back our country,” Meadows said. “2012 is the time that we’re going to send Mr Obama home to Kenya or wherever it is. We’re gonna do it.” In an interview with Roll Call in 2012, Meadows said he had used a “poor choice of words” and acknowledged that Obama was an American citizen.

Source: Republican who denied he was racist suggested Obama was born in Africa | US news | The Guardian

Donald Trump’s self-reverential style of personalised, fly-by-the-seat-of-your-pants diplomacy just crashed and burned in Hanoi. It is fitting, perhaps, that Vietnam – scene of past American humiliations – was the setting for the blunderer-in-chief’s greatest flop. Trump tried to wing it in nuclear talks with North Korea’s more canny leader, Kim Jong-un, and got what he deserved: precisely nothing. The summit, like last year’s effort in Singapore, was a Trump vanity project – and proved a labour in vain.

In principle just about everybody, including close neighbours South Korea, China and Russia, would like to see North Korea’s nuclear arsenal brought under international supervision, and preferably eliminated altogether. To make such a mess of things, given this exceptional consensus, is a true measure of Trump’s incomparable incompetence. Yet this is barely a surprise. It is entirely of a piece with his amateurish approach to key foreign policy challenges the world over.