He said Facebook users want tailored ads. According to our research, that’s not true. 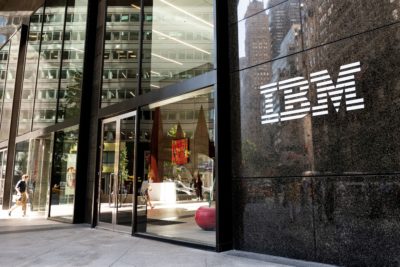 In sworn testimony filed recently as part of a class-action lawsuit against IBM, a former executive says she was ordered not to comply with a federal agency’s request that the company disclose the names of employees over 50 who’d been laid off from her business unit.

Catherine A. Rodgers, a vice president who was then IBM’s senior executive in Nevada, cited the order among several practices she said prompted her to warn IBM superiors the company was leaving itself open to allegations of age discrimination. She claims she was fired in 2017 because of her warnings.

Company spokesman Edward Barbini labeled Rodgers’ claims related to potential age discrimination “false,” adding that the reasons for her firing were “wholly unrelated to her allegations.”

Join 100,000 discerning readers and get everything we publish by signing up for ProPublica’s Daily Digest.

Rodgers’ affidavit was filed Jan. 17 as part of a lawsuit in federal district court in New York. The suit cites a March 2018 ProPublica story that IBM engaged in a strategy designed to, in the words of one internal company document, “correct seniority mix” by flouting or outflanking U.S. anti-age discrimination laws to force out tens of thousands of older workers in the five years through 2017 alone.

Rodgers said in an interview Sunday that IBM “appears to be engaged in a concerted and disproportionate targeting of older workers.” She said that if the company releases the ages of those laid off, something required by federal law and that IBM did until 2014, “the facts will speak for themselves.”

“IBM is a data company. Release the data,” she said.

Rodgers is not a plaintiff in the New York case but intends to become one, said Shannon Liss-Riordan, the attorney for the employees.

IBM has not yet responded to Rodgers’ affidavit in the class-action suit. But in a filing in a separate age-bias lawsuit in federal district court in Austin, Texas, where a laid-off IBM sales executive introduced the document to bolster his case, lawyers for the company termed the order for Rodgers not to disclose the layoffs of older workers from her business unit “unremarkable.”

They said that the U.S. Department of Labor sought the names of the workers so it could determine whether they qualified for federal Trade Adjustment Assistance, or TAA, which provides jobless benefits and re-training to those who lose their jobs because of foreign competition. They said that company executives concluded that only one of about 10 workers whose names Rodgers had sought to provide qualified.

In its reporting, ProPublica found that IBM has gone to considerable lengths to avoid reporting its layoff numbers by, among other things, limiting its involvement in government programs that might require disclosure. Although the company has laid off tens of thousands of U.S. workers in recent years and shipped many jobs overseas, it sought and won TAA aid for just three during the past decade, government records show.

Company lawyers in the Texas case said that Rodgers, 62 at the time of her firing and a 39-year veteran of IBM, was let go in July 2017 because of “gross misconduct.”

Rodgers said that she received “excellent” job performance reviews for decades before questioning IBM’s practices toward older workers. She rejected the misconduct charge as unfounded.

Legal action against IBM over its treatment of older workers appears to be growing. In addition to the suits in New York and Texas, cases are also underway in California, New Jersey and North Carolina.

Liss-Riordan, who has represented workers against a series of tech giants including Amazon, Google and Uber, has added 41 plaintiffs to the original three in the New York case and is asking the judge to require that IBM notify all U.S. workers whom it has laid off since July 2017 of the suit and of their option to challenge the company.

One complicating factor is that IBM requires departing employees who want to receive severance pay to sign a document waiving their right to take the company to court and limiting them to private, individual arbitration. Studies show this process rarely results in decisions that favor workers. To date, neither plaintiffs’ lawyers nor the government has challenged the legality of IBM’s waiver document.

Many ex-employees also don’t act within the 300-day federal statute of limitations for bringing a case. Of about 500 ex-employees who Liss-Riordan said contacted her since she filed the New York case last September, only 100 had timely claims and, of these, only about 40 had not signed the waivers and so were eligible to join the lawsuit. She said she’s filed arbitration cases for the other 60.

At key points, Rodgers’ account of IBM’s practices is similar to those reported by ProPublica. Among the parallels:

Barbini, the IBM spokesman, didn’t comment on individual elements of Rodgers’ allegations. Last year, he did not address a 10-page summary of ProPublica’s findings, but issued a statement that read in part, “We are proud of our company and our employees’ ability to reinvent themselves era after era, while always complying with the law.”

The possible presidential campaign of billionaire businessman Howard Schultz got off to a rocky start on Monday night, when he was repeatedly heckled by New Yorkers at the Union Square Barnes & Noble, the first stop of his nationwide book tour. [ more › ] 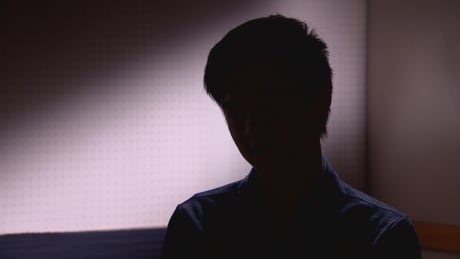 In the fall of 2016, an 18-year-old tried for a second time to take his own life. After his second discharge from hospital in less than a month, a university administrator handed him a notice of eviction from residence.

And latte has no calories? Look back at Gore and Clinton defeats and votes independents got. 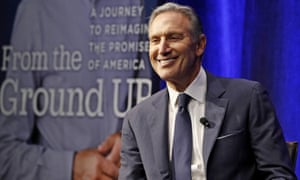 Ex-Starbucks CEO Howard Schultz believes his critics have it all wrong, defending his potential independent run for president after coming under fire from Democrats who say he may inadvertently help re-elect Donald Trump.

“Nobody wants to see Donald Trump removed from office more than me. If I decide to run for president as an independent, I will believe and have the courage and the conviction to believe that I can win,” Schultz said on Monday night at a Manhattan Barnes & Noble, where he was promoting his new book From the Ground Up: A Journey to Reimagine the Promise of America. 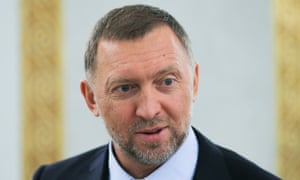 A recent disclosure that Trump’s campaign chairman and a key Russian business associate discussed a Ukraine peace plan in mid-2016 could signal more scrutiny of a powerful Russian oligarch by special counsel Robert Mueller, who is investigating Russian meddling in the 2016 election, former prosecutors and intelligence officials told the Guardian.

The timing of the talks between Trump’s campaign chairman, Paul Manafort, a veteran political consultant, and Konstantin Kilimnik, his longtime aide who allegedly had ties to Russian intelligence in 2016, occurred in New York on 2 August.

What will Bolton and Trump do with Cameroon? Threaten as they are Venezuela? 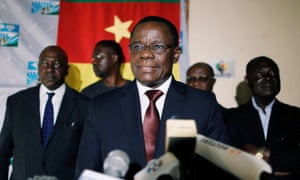 The Cameroonian opposition leader who claims he won last year’s election has been arrested.

Police arrested Maurice Kamto on Monday along with several other opposition figures, including one who was pulled out of his hospital bed where he was recovering from gunshot wounds sustained at a protest against the central African country’s longtime president, Paul Biya. 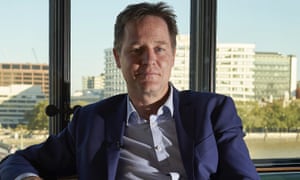 Facebook and its new head of global affairs, Nick Clegg, stand accused by Brussels of taking a “patchy, opaque, and self-selecting” approach to tackling disinformation.

The description was said to apply to a number of internet companies by the EU commissioner, Sir Julian King, at the publication of a progress report on the attempt to clamp down on fake news before May’s European elections. 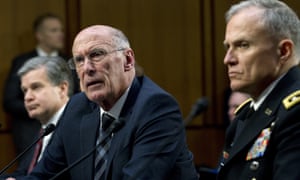 In a statement to the Senate, Daniel Coats said North Korea is unlikely to give up its nuclear weapons

The head of US intelligence has said that North Korea is “unlikely to give up” its nuclear weapons because its leadership sees them as “critical to regime survival” – in comments which contrasted sharply with Donald Trump’s own assessment.

Daniel Coats, the director of national intelligence, made his assessment in a written statement on “worldwide threats” to the Senate on Tuesday, which was noteworthy for the many ways it differed from the rhetoric favoured by the president and his top aides. 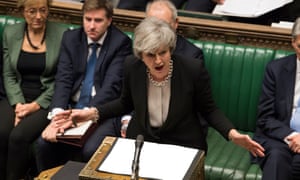 The Brady amendment passed. But ultimately the problem is not the deal, or the backstop, or Brussels: it is Brexit itself

British politics now follows the tortured pattern of addiction. Inside the addict’s head the most important thing is getting to the next Brexit fix, scoring the best deal. But from the outside, to our European friends and family, it is obvious that the problem is the compulsive pursuit of a product that does us only harm. On Tuesday night Theresa May thought she had scored: a slender majority in parliament voted for an imaginary agreement in Brussels, stripped of the hated “backstop”. Tory Eurosceptic ultras and the DUP pledged conditional allegiance to the prime minister if she delivers “alternative arrangements” for a seamless border on Northern Ireland. But no one has any idea what those might be and the EU has already ruled out a renegotiation on terms that might satisfy the hardliners. The transient buzz of Tory unity will yield to the chilly comedown of Brexit reality, as it always does.