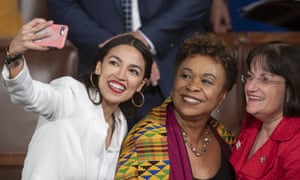 You might have seen the clip floating around social media. It’s a panel discussion from the World Economic Forum at Davos, in which Michael Dell, the billionaire CEO responds to a question about a 70% marginal tax rate on the wealthiest Americans, a proposal recently floated by US representative Alexandria Ocasio-Cortez.

“No, I’m not supportive of that,” Dell says, to much laughter from the assembled plutocrats. “And I don’t think it will help the growth of the US economy. Name a country where that’s worked.”

Smell the coffee! Being rich does not mean we need pay attention to anything but your coffee. Time to stop worshiping rich as if they know something about government and democracy just because they are rich.

Howard Schultz, who built Starbucks into a mega-brand, has set his sights on America’s top job. But history suggests his plan to run as an independent could cost him, writes Micheline Maynard.

Luke Leo House Jr. was a 94-year old WWII veteran and, as a member of the Montford Point Marines, one of the first black men to serve in the Corps.

Israel’s Minister of Agriculture and Development of the Negev, Uri Ariel, has completed a massive plan to expel some 36,000 Bedouin Palestinians from their unrecognized villages, according to the Israel Today Hebrew newspaper.

The implementation of the plan, if approved, is scheduled to start this year, and would be completed within four years.

The confiscated Bedouin areas are estimated at 260,000 dunums, on which the  Israeli authorities will establish what they called national projects, infrastructure and other “security” measures, which are required to ‘transfer’ the population to other villages, according to the newspaper.

On the ruins of the villages after their displacement, the Israeli authorities will expand the “Trans-Israel Highway” (Route 6), south of Israel, to the town of Nabatim in the Naqab, an area of ​​12,000 dunums, The Israeli authorities intend to transfer them to Tel Sheva, Abu Talul and Umm Batin.

According to the plan, the displacement will begin this year, north of Route 31, and will last for four years. Final displacement in 2021 will begin with an annual budget increase, through intensified law enforcement authorities, in reference to the Israeli Police and the Ministry of Internal Security.

The villages do not appear on Israeli official maps, and the Israeli authorities do not provide them with basic services such as water and electricity. The residents do not have addresses and the authorities do not recognize their rights on the land, and consider them “violators” who take over “state lands.”

The Bedouin Development Authority was established in 1984 and controls the planning of displacement projects in the Naqab and administers the Israel Land Administration.

The lower house of the Irish parliament passed a law on Thursday preventing the importation or sale of goods from Israeli settlements.

The Control of Economic Activity (Occupied Territories) Bill, originally proposed by Senator Frances Black, was passed in the Irish Senate back in January 2018. On Thursday, Irish MP Niall Collins, of the Fianna Fail opposition party, introduced the bill in the lower House (Dail Eireann), where it passed by a margin of 78 votes to 45, with three abstentions.

The bill declares it seeks to ‘give effect to the Irish state’s obligations under the Fourth Geneva Convention relative to the protection of Civilian Persons in Time of War and under customary international humanitarian law.’

The Irish governing party, Fine Gael, voted against the bill, claiming its passage would harm Irish-Israeli relations, while also endangering Ireland’s relationship with the United States. Parliamentarians had faced intense lobbying from US congressional opponents of the legislation, yet still voted for the bill in a clear demonstration of opposition cross-party support.

Responding to government threats that opposing US policy would lead to economic retaliation, Mr Collins said  that the US had to ‘clean up its act’ in relation to its social and moral responsibilities. ‘We cannot give it a free pass on everything simply because it provides us with jobs,’ he argued.

As happened after the passing of the Senate bill, the result of the lower house vote drew an immediate and predictable response from the Occupying Authorities. The Irish ambassador was summoned, as Prime Minister Netanyahu declared Israel to be ‘outraged’ by a bill he described as ‘anti-semitic’. Meanwhile, the foreign ministry said it constituted ‘an expression of pure hostility’ and a ‘clear expression of obsessive discrimination.’

The latest developments in Ireland reflect a continued support of the Palestinian cause across the country. Sligo and Dublin councils recently flew the Palestinian flag to commemorate the expulsion of 750,000 Palestinians from their land in 1948, while the town of Tralee, in County Kerry, is in the process of twinning with Beit Sahour.

Despite the bill still having a number of stages to pass through, Thursday’s vote has effectively ensured it will eventually be signed into law.

In response to a recall by Satur Farms, Whole Foods Market is voluntarily recalling various prepared foods items in eight states containing baby spinach because of a potential contamination of Salmonella.

Jac. Vandenberg, Inc. of Yonkers, New York is recalling 1,727 cartons of Fresh Peaches, 1,207 cartons of Fresh Nectarines and 365 cartons of Fresh Plums because they have the potential to be contaminated with Listeria monocytogenes, an organism which can cause serious and sometimes fatal infections in young children, frail or elderly people, and others with weakened immune systems.

Like Loading...
News
As the Trump administration rolls back environmental and safety rules for the energy sector, government projections show billions of dollars in savings reaped by companies will come at a steep cost: more premature deaths and illnesses from air pollution, a jump in climate-warming emissions and more severe derailments of trains carrying explosive fuels.

Is this another country Trump wants to invade or sponsor a coup in? Cameroonians are taking their grievances against the regime of President Paul Biya to the world. Over the weekend, Cameroonians occupied the embassies of their country in Berlin and Paris, to support protests back home.