And for sure, Venezuela does not need former colonialists setting her future! 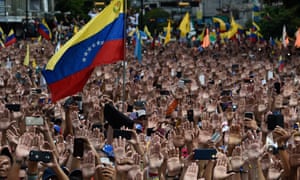 Nicolás Maduro was re-elected Venezuela’s president last May by fraudulent means, as regional governments and independent observers noted at the time, and his leadership lacks legitimate authority. Maduro, in office if not in power since 2013, has proved himself an incompetent and unimpressive successor to the late socialist president, Hugo Chávez, on whose name and reputation he shamelessly trades.