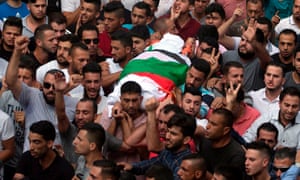 Israeli prosecutors have charged a 16-year-old Israeli settler with manslaughter after he was accused of throwing a rock at a speeding car and killing a Palestinian woman.

According to the indictment, the suspect deliberately targeted the family car on 12 October in the occupied West Bank in an anti-Arab attack “as part of an act of terror”.