John Wilkes Booth “I was not shooting President Lincoln, I tripped and the gun just went off.” 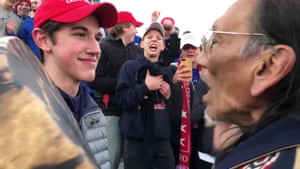 Nick Sandmann said on NBC he was ‘not disrespectful’ during his interaction with Nathan Phillips, an Omaha tribe leader

The high school student filmed in an apparent standoff with a Native American activist in Washington DC has said he was “not disrespectful” and “wasn’t smirking” during the interaction, as a spokesman for Donald Trump said students from Covington high school may be invited to the White House.

“As far as standing there, I had every right to do so,” Nick Sandmann told NBC Today’s Savannah Guthrie. A video which was widely shared over the weekend showed Sandmann grinning inches from Nathan Phillips, an Omaha tribe leader, as Phillips sang and played a drum. 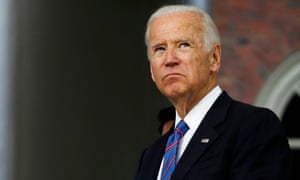 In the first three weeks of 2019 alone, a broad range of Democratic members of Congress have announced their candidacy for US president, including Julián Castro, Tulsi Gabbard and Kirsten Gillibrand. Washington insiders are speculating about many more to come, such as Amy Klobuchar and the seemingly inevitable Beto O’Rourke.

What all these Democratic hopefuls have in common is little to no name recognition. A recent NPR/PBS Newshour/Marist poll showed that a majority of Democrats and Democratic-leaning Independents had either never heard of them or were “unsure” whether they were favorable or unfavorable towards them. While we are still almost two years away from the 2020 elections, that is not a good start. 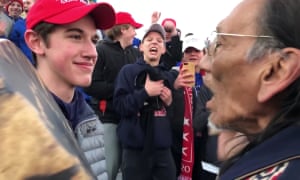 The standoff between students and a Native American man reveals who gets compassion, and who doesn’t

On the steps outside the Lincoln Memorial in Washington DC, a white teenager sporting the red cap accoutrements of the Trump campaign stands nose-to-nose with a bespectacled Native American elder singing and playing a hand drum. The teen is smirking – his expression, for me, oozes entitlement. Behind him an unruly crowd – all male, all white, many also wearing the conspicuous Maga apparel – is jeering the elder in a frenzy of Lord of the Flies privilege. (In another video, some of the boys can be seen cackling while war-whooping and making the tomahawk chop gesture popularized by sports teams with Native American mascots like the Atlanta Braves.) 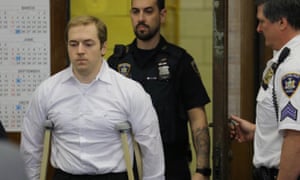 A white supremacist has pleaded guilty to killing a black man with a sword as part of a racist plot that prosecutors described as a hate crime.

This bill was referred to the House Committee on Oversight and Reform which will consider it before sending it to the House floor for consideration.

This resolution was referred to the House Committee on the Judiciary which will consider it before sending it to the House floor for consideration.

There is no BOTH SIDES to this Government Shutdown. There simply isn’t. Dolt45 and The Turtle are responsible for the Government Shutdown. Period. The Democrats have watched and have had their last nerve snapped. They are done. They are not going to negotiate with terrorists. It was Dolt45 who damaged DACA. It was Dolt45 who damages TPS. The Supreme Court has already given a pass to hearing the case on DACA, which means that those under DACA’s protections don’t have to worry about it for another year. So, exactly what was Dolt45 going to negotiate with, considering that the Supreme Court has already made its decision. Give into them now, and they’ll be back to the well when the debt ceiling comes up. And, then, it ‘ll be something else. NO.NEGOTIATING.WITH.TERRORISTS.

Source: Wednesday Open Thread | There Is No Deal To Be Made…Stay Strong, Madam Speaker | 3CHICSPOLITICO

Nine days ago, in Argentina’s Growing Hantavirus Outbreak, we looked at an unusually large cluster of hantavirus cases – which began in late November – in the small village of Epuyén in the Patagonian province of Chubut.

At that time there were reportedly 28 cases and 10 deaths, including media reports of a 29 year-old nurse who died in neighboring Santiago, Chile (see Hantavirus travels to Argentina and arrives in Chile: nurse dies in Santiago).

Today the World Health Organization has published a large update and risk assessment on the outbreak. Although the number of new cases have dropped markedly over the past 3 weeks (n=3), due to the long incubation period (1-8 weeks) of the Andes Hantavirus, additional cases could turn up.

I’ve only posted excerpts from a much longer WHO report.  Follow the link to read it in its entirety.

The index case had environmental exposure prior to symptom onset on 2 November, and subsequently attended a party on 3 November. Six cases who also attended the party experienced the onset of symptoms between 20-27 November 2018.

An additional 17 cases, all of whom were epidemiologically-linked to previously confirmed cases, experienced symptom onset between 7 December 2018 and 3 January 2019 (Figure 1). Potential human-to-human transmission is currently under investigation.

Of the confirmed cases, 59% were female, and had an incubation period ranging from 8 to 31 days. Approximately 50% of these confirmed cases reported symptoms within the past three weeks. Cases were confirmed by ELISA IgM u-captura or by polymerase chain reaction (PCR).

As of 17 January 2019, a total of 98 asymptomatic contacts have been identified and are being monitored for the potential development of symptoms.

In Argentina, four endemic regions have been identified: North (Salta, Jujuy), Centro (Buenos Aires, Santa Fe, and Entre Ríos), Northeast (Misiones) and Sur (Neuquén, Río Negro, and Chubut). Between 2013 and 2018, an average of 100 confirmed cases were registered annually, with the provinces of Buenos Aires, Salta, and Jujuy having the highest numbers of cases. Between 2013 and 2018, 114 confirmed deaths from hantavirus were reported in Argentina, with a case-fatality rate of 18.6%, though this figure was close to 40% for some provinces in the southern region of the country.

In Chile, one of the confirmed cases was a healthcare worker who resides in Palena Province, Los Lagos Region, and reported experiencing symptoms on 2 January 2019. The case had a travel history to Epuyén for one day in mid-November, and later hosted and cared for a confirmed case from Epuyén while she was in her prodromal phase. This is the first confirmed case of hantavirus in Los Lagos Region in 2019. During 2018, there were eight cases of hantavirus reported in Chile, including two deaths.

HPS is a zoonotic, viral respiratory disease. The causative agent belongs to the genus Hantavirus, family Bunyaviridae. The infection is acquired primarily through inhalation of aerosols or contact with infected rodent excreta, droppings, or saliva of infected rodents. Cases of human hantavirus infection usually occur in rural areas (e.g. forests, fields, and farms) where sylvatic rodents hosting the virus might be found and where persons may be exposed to the virus.

This disease is characterized by headache, dizziness, chills fever, myalgia, and gastrointestinal problems, such as nausea, vomiting, diarrhea, and abdominal pain, followed by sudden onset of respiratory distress and hypotension. Symptoms of HPS typically occur from two to four weeks after initial exposure to the virus. However, symptoms may appear as early as one week and as late as eight weeks following exposure. The case-fatality rate can reach 35-50%.

In the Americas, HPS cases have been reported in several countries. Environmental and ecological factors affecting rodent populations can have a seasonal impact on disease trends. Since the reservoir for hantavirus is sylvatic rodents, mainly Sigmodontinae species, transmission can occur when people come in contact with the rodent habitat. Limited human-to-human transmission of HPS due to Andes virus in Argentina has been previously documented. There are no specific evidence-based procedures for HPS patient isolation. Standard precautions1 should always be put in place, as well as rodent control measures.

Thirteen of 18 health zones in the region have reported cases in the past 3 weeks, and deaths have reached 439.

Everybody knows that the federal deficit is outrageous…..and everybody has a party that has a plan to control the deficit…..the only problem it is seldom that important until election time and then it is paramount and will destroy the nation if not brought under control.

All that is pure rancid manure spread by small minded idiots in the Right.

As usual the way to control the deficit is by screw someone in society…..the poor, the aging and the veterans…..well the CBO has a good plan to screw the veterans again……

Some vets use the VA but more have access to Tricare…….and this is where the CBO said changes needed to be made……

With the federal deficit expected to top $1 trillion this year, the Congressional Budget Office in December published a list of options for reducing the imbalance over the next 10 years, including three suggestions on Tricare