State television, from which a significant number of Poles get their news, consistently smears, in aggressive and defamatory language, the political opposition and anyone who thinks differently from the ruling party. The murdered mayor had been called a thief, a German, a homophile and a Mafioso. Furthermore, television propaganda has repudiated the justice system for the past three years, calling it harmful for citizens, in need of a complete changing of the guard; judges are accused of being a caste above the law. From his jail cell, this man would have seen precisely these messages, of bad guys and the necessity of radical solutions.

With the Arctic warming rapidly, ice loss in Greenland is accelerating and may soon be a major factor in rising sea levels, according to a new study.

The World Health Organization has warned that anti-vaccine propaganda is causing an alarming resurgence in preventable diseases. SPD politician Karl Lauterbach has called for mandatory vaccination in Germany.

As the Islamic State has lost territory, many of its fighters have gone underground or returned to their former lives rather than being killed or captured. An estimated 20,000 to 30,000 fighters remain at large in Iraq and Syria, raising concerns about a resurgence of the group.

No surprise – part of the current PM’s election campaign and US does no care. After years of ambiguity, the Israel leadership has grown bolder about acknowledging strikes in Syria just after they occur, raising fears of prompting retaliation.

The chant goes up…Tax the rich….Tax the rich…..somewhere there will be villagers with pitchforks waiting on the arrival of the “tax man”…..

Enough fanciful stuff……there is a movement taking to the airwaves a proposal for a 70% tax on the ultra-rich…..and by damn the idea has got a majority approval in the polls…..

Rep. Alexandria Ocasio-Cortez (D-N.Y.) sparked a flood of hysterical and error-filled responses from the right when she suggested in a recent “60 Minutes” interview that America’s top marginal tax rate should be hiked to 70 percent to help pay for bold progressive programs, but a survey published on Tuesday found that the majority of Americans are on the freshman congresswoman’s side.

Conducted by The Hill in partnership with the market research firm HarrisX, the poll found that 59 percent of the U.S. public supports raising the marginal tax rate on the richest Americans to 70 percent. The…

“The white moderate” was more of an obstacle than “the Ku Klux Klanner.”

Ocasio-Cortez, one of the most popular of that new and notably diverse cohort of Democrats, took issue with Sorkin’s characterisation of equality as a political distraction. “News Flash: Medicare for All and equal rights aren’t trends,” Ocasio-Cortez tweeted on Sunday afternoon. Ocasio-Cortez is the youngest Democrat congresswoman, at 29, and a vocal left-wing figure in the party. “When people complain about low turnout in some demos, it’s not because communities are apathetic, it’s because they don’t see you fighting for them. If we don’t show up for people, why should you feel entitled to their vote?” 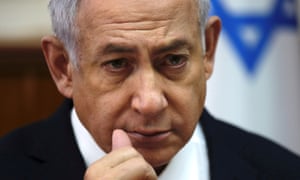 In a very unusual move, military issues a statement about attack and warns Syrian forces not to retaliate

Israel’s military has said it struck Iranian Quds targets inside Syria and warned Syrian forces not to attack Israeli territory or forces.

Syrian state media cited a Syrian military source as saying Israel launched an “intense attack through consecutive waves of guided missiles”, but that Syrian air defences destroyed most of the “hostile targets”.