The House floor erupted Thursday after Congress adjourned for the week when an unidentified Republican congressman yelled a controversial and potentially racially charged remark across the aisle as Democratic Rep. Tony Cárdenas was at the podium. “Go back to Puerto Rico!” the lawmaker shouted, punctuating a stream of Republican whooping and hollering at the Democratic majority for holding a voice vote — instead of the normal roll call vote — to… 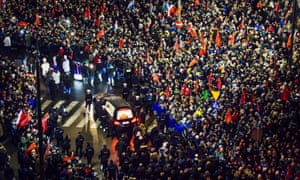 Carrying flags and candles in cold streets, thousands of Poles walked beside the coffin of Gdansk’s former mayor Pawel Adamowicz, who was stabbed on stage at a charity event.

The murder of a liberal critic of the ruling party’s anti-immigrant policies highlighted the charged atmosphere in parts of eastern Europe where populist leaders have fanned nationalist sentiment.