The Detroit Metro Times highlighted Engler’s comment today, noting that when he was governor “Engler fought hard against a lawsuit brought by dozens of female inmates who had been raped by state corrections officers. Despite Engler’s efforts, it ended in what at the time was the largest payout in state history.” The chairwoman of the MSU Board of Trustees, Dianne Byrum, distanced the board from Engler’s statement in a statement to the Chronicle of Higher Education: “His remarks were ill advised and not helpful to the healing process, survivors, or the university.” In his interview with the Detroit News last week, Engler mentioned all the work that he has done so that the hypothetical next president of the university can take over the job and look ahead. Whether or not that’s even true—MSU has repeatedly bungled its handling of the Nassar investigation and ensuing fallout—it raises the question of why Engler, who was named interim president last February and has shown himself to be unfit as the university president time and again, has been allowed to remain at the helm for nearly a year. A Bundestag employee of the Alternative for Germany party has been accused of ordering a firebombing in Ukraine. Manuel Ochsenreiter denies all accusations, but he is known to have connections to pro-Russia separatists.

While some Republicans suggested the Iowa congressman’s views were new to them, Mr. King has a long and documented history of denigrating racial minorities. 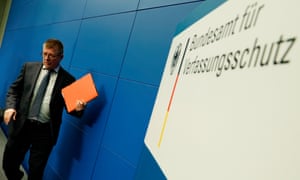 Germany’s domestic intelligence agency is to begin monitoring elements of the anti-immigrant Alternative for Germany (AfD), placing particular focus on Björn Höcke, a nationalist agitator considered one of the driving forces in a move to take the party towards the extreme right.

The BfV said it would also be keeping the party’s youth wing, Young Alternative (JA), under surveillance and would investigate whether the AfD as a whole should be put on its official watchlist, but said it still had insufficient evidence for doing so.

This bill was referred to the House Committee on the Judiciary which will consider it before sending it to the House floor for consideration.

This bill was referred to the House Committee on Oversight and Reform which will consider it before sending it to the House floor for consideration.

This resolution was referred to the House Committee on Ethics which will consider it before sending it to the House floor for consideration.

Passed House (Senate next):
Last Action: On motion to suspend the rules and pass the bill Agreed to by voice vote.
Explanation: This bill passed in the House on January 14, 2019 and goes to the Senate next for consideration.

Legislation Coming Up: This resolution has been added to the House’s schedule for the coming week, according to the House Majority Leader. More information can be found at http://bit.ly/2g091ss.

Last Action: This resolution is in the first stage of the legislative process. It was introduced into Congress on January 14, 2019. It will typically be considered by committee next before it is possibly sent on to the House or Senate as a whole.