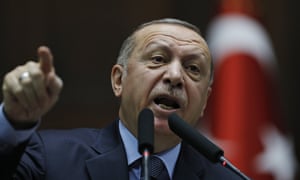 Turkey has asked Washington to hand over its bases in Syria as the Trump administration appeared to reverse plans to withdraw from the country’s north-east on Tuesday, jeopardising Ankara’s plans to launch a widespread military operation targeting Kurdish groups.

The fresh row between the two Nato allies broke out as the US national security adviser, John Bolton, visited Ankara to row back on a surprise announcement by Donald Trump in December that US forces would leave Syria imminently, abandoning Kurdish proxies who had led its ground war against the Islamic State terror group. Turkey views those same Kurdish groups as mortal foes.