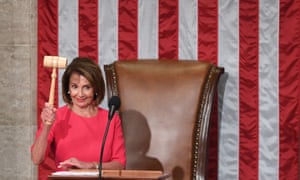 For two years the President has shown disdain for the institutions and practices of governance. Bad move. A new era has just dawned

The Trump White House has frequently been called chaotic, wild, undisciplined, disorderly. But a better word might be “unruly,” because if there’s one thing Donald Trump can’t abide, it’s rules. Not only has the Trump administration signally failed to follow the rules, it’s not clear it ever bothered to learn them. But as the Democrats took control of the House of Representatives last week, that abruptly changed. Trump is about to get schooled in the rules of the game.

For two years, thanks to a Republican Congress that chose not to honor its constitutional duty to maintain oversight of the executive branch, the American political drama has centred on special counsel’s Robert Mueller’s investigation. But that focus is about to widen, as Nancy Pelosi, the once and future Speaker of the House, reclaimed the gavel, promising to show Americans its power: the picture of her smiling as she wielded it went viral, for good reason.