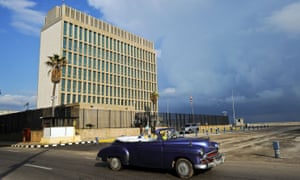 The US embassy in Havana more than halved its staff in 2017 when diplomats complained of headaches, nausea and other ailments after hearing penetrating noises in their homes and nearby hotels.

The mysterious wave of illness fuelled speculation that the staff had been targeted by an acoustic weapon. It was an explanation that appeared to gain weight when an audio recording of a persistent, high-pitched drone made by US personnel in Cuba was released to the Associated Press.