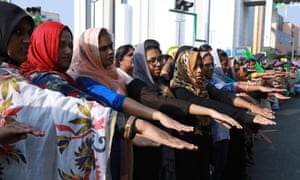 On 1 January, in one of the biggest movements for women’s rights in India, 5 million women lined up across the length of the southern state of Kerala to “uphold Renaissance values”. What they were demanding was an end to violent agitations against women trying to enter Kerala’s Sabarimala temple, a popular Hindu pilgrimage site. This followed a ruling by the Indian supreme court in September, which forced the temple’s doors open to women of all ages in a sensational blow to religious tradition.

“Where a man can enter, a woman can also go. What applies to a man, applies to a woman,” the bench said in its judgment. Since 1991, the temple has accepted only men and older women, in their millions every year, to preserve the mythological celibacy of the ruling deity, Ayyappa. In theory, the court order only reinforced Indian women’s constitutional right to enter places of worship as freely as men, but in practice it wreaked mayhem. Between 17 November and 24 December, more than a dozen women of menstrual age, including reporters, tried to enter the temple but were stopped, shoved and stoned by mobs of male devotees. None of the women could make it in, despite police protection and prohibitory orders. Both sides are far from giving in. Protests have since continued, though most women who were sent back by the mobs have vowed to return.