An earthquake hits the southern Italian island of Sicily, triggered by eruptions from nearby Mount Etna, injuring at least 10 people and damaging churches and houses on the volcano’s slopes.

Congolese health officials and their international partners expect the fight against Ebola to drag on well into next year. The biggest worry is that, unchecked, the epidemic could reach Goma, the regional capital. “If it hits Goma, we’re done for,” said Dr. Jean-Christophe Shako, the director of a local Ebola response team whose tasks require negotiating with the militia so that health workers can enter their territories and have their safety guaranteed. The city sits on a busy border with Rwanda and has an international airport that could disperse the disease globally.

The partial federal shutdown is now in its fifth day and most agencies are still running. But at the Jacob Javits Federal Building, in Lower Manhattan, even a partial shutdown can still lead to confusion. [ more › ]

A recently arrived Mexican immigrant who had just picked up her mother at a senior center when she was accidentally shot by an NYPD officer in pursuit of a robbery suspect spoke today from her Bronx bed about the incident, and the $10 million notice of claim she has filed against the NYPD and the City of New York. [ more › ] 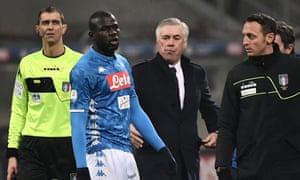 Carlo Ancelotti said the referee repeatedly ignored Napoli’s request to stop the game after Kalidou Koulibaly was reportedly subjected to monkey chants throughout their 1-0 defeat to Internazionale on Boxing Day.

Substitute Lautaro Martínez scored in stoppage time to give Inter a 1-0 win after Napoli had two players sent off. Koulibaly was booked for a foul on Matteo Politano – who waved a pretend yellow card in the air – and then immediately given a second yellow for sarcastically applauding the referee.

#Ebola watch – This is not good – worry that enough time has elapsed for a variant to break out that will leapfrog means to contain it.

In another development, the country’s election commission had delayed the vote in some Ebola-hit areas.

Her recent special — “Christmas on I.C.E.” — was a perfect example of her signature blend of comedy and social activism.

Security flaws threaten our privacy and bank accounts. So why aren’t we fixing them?

And the wolf to restore balance to the ecology. OGLALA SIOUX NATION, U.S.A. – Blood staining their hands, dozens of men, women and children are wielding knives in the schoolyard. Bones and flesh and entrails are heaped in mounds all around. This scene in the heartlands of the United States is, however, anything but the kind of violent outbreak besieging schools across the country. […]

Like Loading...
News
A Minnesota-based poultry producer is recalling more than 164,000 pounds of raw ground turkey products that may be contaminated with salmonella.