Once upon a time there lived in the little village of Saranac, New York a dear little girl named Carmen whose papa and mama were very poor but happy as Christmas time drew near.

Carmen talked of Santa Claus and wondered if he would visit her. She had a dear good Auntie who was always thoughtful for her comfort and did many things for her that her mamma was unable to do because she was an invalid.

So when Auntie made her presents, she gave nice big gingham aprons or dresses, or stockings which made mama’s heart glad, for she knew they were the very things her girlie needed.

A short time before Christmas papa hired a pony and carriage and took Carmen and went to the stores to do their Saturday shopping. In one store, where they went, were beautiful dollies of all kinds and many pretty toys. Carmen selected a little cradle, a little white high chair for dollie and a cute little dollie in pink dress and bonnet. Mama got her candy also and some necessary articles of clothing.

One day a letter came from dear Auntie saying a box was on the way full of Christmas cheer – and when it was opened, the dear baby was delighted with the nice new aprons, bibs, slippers, etc. But she knew they were from Auntie – not Santa and her toys she knew were from papa and mama. And when anyone asked her what Santa brought her, she would say, “He didn’t bring me neny sing.” This made mama feel badly for she couldn’t do any more for her baby but would tell her that she had been well rewarded by others – but still she could not forget that Santa had forgotten her.

As mama was setting the table for tea on Christmas night, she took down a small glass dish for pickles – one she had not used for a long time and Carmen had forgotten she had. So she asked where it came from. Mama told her she found it one time in her stocking on Christmas morning. “Well, couldn’t I hang up my stocking?” asked Carmen. “It is too late my dear,” said Mama. Santa filled stockings last night. “Well… but maybe he would remember that he forgot me and will come tonight,” said Carmen. Mama told her to run along and not bother her – for she was nervous and sometimes a little cross, and Carmen annoyed her with so many questions.

When bedtime came, she got ready for bed and mama told her she might get into her own bed down stairs till papa went up – then she wouldn’t be up there all alone. No one noticed her undressing but a long time after she was asleep papa said, “I guess I’ll shave.”

He got things ready and as the fire was low, he went out to get wood – so thought he would prepare the kindling for the morning fire at the same time. While he was out, Mama happened to notice that on one the two posts of a chair were hung two little stockings – all baggy at the knee where some little girl had romped and played, and a tiny hole, which the garter made at the top.

The big tears started in mama’s eyes and a big stinging in her nose made more big tears. When papa came in she said, “Look! What faith the child has.” Papa’s eyes were a little misty too. He said, “Haven’t you any thing you could put in there?” But she had nothing that Carmen had not seen.

Money was scarce – for the farmers papa chopped wood for did not always have ready money to pay him. But by hunting around, they scared up forty cents and papa said, “I’ll not shave but will hurry down and the drug store will likely be open and I may be able to get something.” It was nine o’clock then – and it being Christmas – the drug store was closed but he found another store open and so did the best he could there.

He got mixed candy and peanuts, oranges and 2 picture books. Mama had some net candy bags, which she filled with candy and put in then the nuts and lastly the books rolled up and sticking out of the top.

When papa got ready for bed he picked Carmen up and carried her up the stairs and when she got up there she awoke and began to ask if he left the door unlocked for Santa, and if he left a light on for him, etc. She could hardly get to sleep again. She was so excited and mama and papa were glad they had discovered the little stockings.

When morning came papa, came down first to build the fire and Carmen called down, “Daddy! Is there neny sing in my stockings?” Daddy said, “Come and see” and there was a very happy little girl that morning.

She was more pleased with those few things than all the other things she got – for “Santa” had brought them. So mama resolved that next year – what ever came for her, something should be reserved and put in the stocking and it would be of greater value.

These are the facts as they happened on the Christmas of 1912.

Maude Wright, my grandmother, was not able to directly keep her promise. She died a few months later from the effects of chronic TB and the birth of her second child.

My mother, Carmen, is the one who actually kept her mother’s vow. Maude Wright mailed the letter to her sister and Carmen’s auntie passed this letter to her. I did not see the letter until one year after after my mother had died on December 7, 1994. It was then, a week before Christmas of 1995, that I understood why my brother and I received a stocking from Santa each Christmas that contained an orange, some nuts, a little left over Halloween candy and a comic book or two. Thanks, Grandma and Merry Christmas to all. Ned Hamson

Palestinian poet Asmaa Azaizeh was born in 1985 in the village of Daburieh, in the Lower Galilee, Palestine:

Azaizeh, who graduated with a degree in English literature in 2006, was the first Director of the Mahmoud Darwish Museum in Ramallah. Azaizeh won the Young Writer Award from Al Qattan Foundation in 2010 for her first volume of poetry, Liwa, published in 2011. Her sophomore collection, As The Woman From Lod Bore Me, was published in 2015, and elements were also staged.

Her poems have since been translated into English, German, Spanish, Farsi, Swedish, Italian, Dutch and Hebrew, among others. Asmaa is currently a cultural curator in Haifa. She has a third collection coming soon.

Do Not Believe Me Were I to Talk to You of War, tr. Yasmine Haj

I Didn’t Believe I Would Ever Learn to Die, tr. Yasmine Haj

The Dance of the…

Thailand, which has a history — until 1930 — of using marijuana for pain relief, approves the plant for medical use and research, the first legalisation of the drug in a region with some of the world’s strictest drug laws.

Thanks to politicians who attack the press… Around two dozen masked youths attacked a group of Bangladeshi reporters with hockey sticks and batons, injuring about 10 of them, when they were resting at a hotel after covering an election rally, the journalists said on Tuesday.

The bats follow food sources provided by industrialized plantation agriculture – nature’s way to balance imbalances created by money hungry humans… The discovery was part of a U.S.-led effort to spot dangerous pathogens in animals before humans are endangered.

Hate-mongers can’t stand being called out and ejected for encouraging hate and violence… No tears for you. Patreon, a crowdfunding site for content creators, is facing a rebellion after its human moderators booted a creator who had violated its hate speech policy.

The question is at the heart of investigations by Congress and federal agencies into whether an American gun manufacturer is entangled in the shadowy world of arms smuggling and wildlife poaching.

The U.S.-led coalition in Syria conducted air strikes last week that destroyed facilities used by Islamic State, the coalition said on Tuesday, less than a week after President Donald Trump declared victory over the militant group and said he would withdraw U.S. troops from the war-torn country. 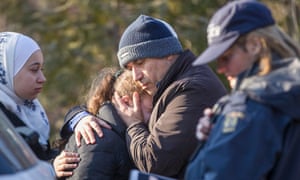 Fearing Trump’s crackdown on immigrants, thousands have entered Canada at unmarked locations along the border

It was once a vital corridor for Americans seeking to escape slavery. Now a stretch of land in the north-eastern US is in the spotlight again, as thousands traipse across the world’s longest undefended border in search of asylum in Canada.

“You can call it the new underground railroad, I think,” said Martha Swan of John Brown Lives, a humanitarian group named after the 19th-century abolitionist based in Westport, New York. “An informal network of people trying to help people who are under siege and who are trying to get to safety.” 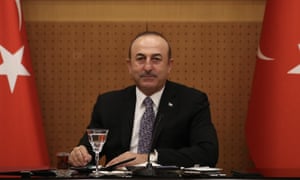 Despite suggestions of a delay in military campaign, Mevlüt Çavuşoğlu insists soldiers will enter

Turkey’s foreign minister has reiterated that Turkish forces are determined to cross the Euphrates river into Kurdish-held territory in Syria as soon as possible, despite previous suggestions from both Washington and Ankara that Turkey would delay the proposed military campaign.

Mevlüt Çavuşoğlu told reporters at a briefing on Tuesday that “if Turkey says it will enter, it will”. While the foreign minister did not give a time frame, Turkey’s president, Recep Tayyip Erdoğan, said last week that Turkey would stall its offensive as part of coordination with the US over the planned withdrawal of US forces from the area.