Appropriate for fascist just before Christmas – That’s why Jesus was born in a stable… Interior Minister Matteo Salvini insists Italian ports “are closed” after the latest docking request by a Spanish migrant rescue ship. The populist Rome government has taken a hard-line approach to the refugee influx.

A black New Yorker says he was racially profiled and harassed by a white neighbor who didn’t believe he lived in their shared apartment building on the Upper East Side. [ more › ] 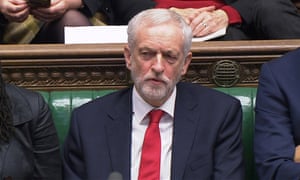 Jeremy Corbyn is facing a storm of criticism from Labour activists and MPs after suggesting he would press ahead with Brexit if the party won a snap general election.

In a sign that he is losing backing among overwhelmingly pro-Remain Labour supporters, Corbyn was also accused of betraying the party membership by appearing reluctant to back the idea of supporting Remain in a second referendum.

The government shutdown officially began at midnight, which means the Violence Against Women Act (VAWA) has expired and programs that assist survivors of domestic violence and sexual assault will be left without funding.

Trump is a “dangerous menace.”

This morning I phoned my friend, the former Republican member of Congress.

ME: So, what are you hearing?

ME: Tell me more.

HE: When it looked like he was backing down on the wall, Rush and the crazies on Fox went ballistic. So he has to do the shutdown to keep the base happy. They’re his insurance policy. They stand between him and impeachment.

ME: Impeachment? No chance. Senate Republicans would never go along.

HE (laughing): Don’t be so sure. Corporate and Wall Street are up in arms. Trade war was bad enough. Now, you’ve got Mattis resigning in protest. Trump pulling out of Syria, giving Putin a huge win. This dumbass shutdown. The stock market in free-fall. The economy heading for recession.

ME: But the base loves him.

HE: Yeah, but the base doesn’t pay the bills.

ME: The GOP’s backers have had enough?

HE: They wanted Pence all along.

HE: So they’ll wait until Mueller’s report, which will skewer Trump. Pelosi will wait, too. Then after the Mueller bombshell, she’ll get 20, 30, maybe even 40 Republicans to join in an impeachment resolution.

HE: Senate Republicans hope that’ll be enough – that Trump will pull a Nixon.

ME: So you think he’ll resign?

HE (laughing): No chance. He’s fu*king out of his mind. He’ll rile up his base into a fever. Rallies around the country. Tweet storms. Hannity. Oh, it’s gonna be ugly. He’ll convince himself he’ll survive.

HE: That’s when Senate Republicans pull the trigger.

ME: Really? Two-thirds of the Senate?

HE: Do the math. 47 Dems will be on board, so you need 19 Republicans. I can name almost that many who are already there. Won’t be hard to find the votes.

ME: But it will take months. And the country will be put through a ringer.

HE: I know. That’s the worst part.

ME: I mean, we could have civil war.

HE: Hell, no. That’s what he wants, but no chance. His approvals will be in the cellar. America will be glad to get rid of him.

ME: I hope you’re right.

HE: He’s a dangerous menace. He’ll be gone. And then he’ll be indicted, and Pence will pardon him. But the state investigations may put him in the clinker. Good riddance.

Translation: Death to Kurds and up to Genocide 2.0! Turkey will take over the fight against Islamic State militants in Syria as the United States withdraws its troops, President Tayyip Erdogan said on Friday, in the latest upheaval wrought by Washington’s abrupt policy shift.

I am proud to shut down the government…I will take the mantle. I will be the one to shut it down. I’m not gonna blame you for it.”—Donald Trump, December 11 U.S. President Donald Trump said on Friday that a partial shutdown of the government would hopefully not last long, after Republican senators failed to muster the votes needed to approve a funding measure that included $5 billion for a border wall fiercely opposed by Democrats. Hundreds of thousands of US public servants will be affected by a partial government shutdown. Lawmakers are at loggerheads over including funding for a border wall in a general spending bill.