The San Francisco Police Department (SFPD) deviates from all other law enforcement agencies in California in two key ways: it continually fails to report Hispanic statistics separately (Open Justice), and it fails to specify exactly what offenses it charges nearly nine in 10 arrested youths.

In 2017, 869 of the 974 arrests of youths under age 18 in San Francisco (89.2 percent) resulted in a charge under three unspecified categories of “other felony” and “other misdemeanor” offenses, as shown in tabulations from the 2017 arrest file provided by the California Department of Justice (DOJ). In California’s other 57 counties, just 1,525 of the total of 56,249 youth arrests (2.7 percent) resulted in charges under these three codes. San Francisco, with fewer than 2 percent of the state’s juvenile arrests, accounted for 36 percent of arrests for unspecified offenses. 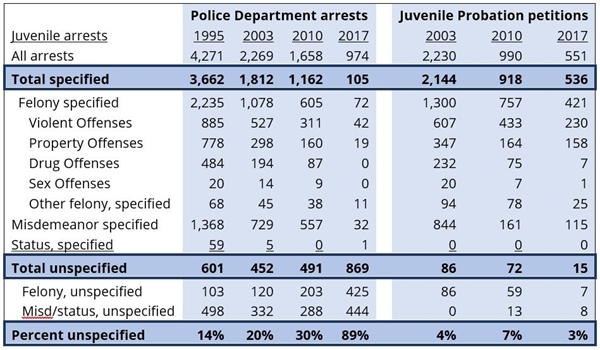 The SFPD’s unique failure to specify exactly what criminal codes nearly 90 percent of youth arrestees are charged with raises multiple issues. First, the Bureau of Criminal Statistics codes (96, 99, and 990) under which 869 arrests of San Francisco youth were made in 2017 are a grab-bag of more than 700 offenses including rare, obscure offenses such as violating fishing regulations, drugging a racehorse, mishandling explosives, and tampering with a signal light. In contrast, just 61 youths were arrested for specified violent or property crimes and none for drug offenses. Since it is unlikely that San Francisco’s 869 youth arrests in 2017 were for obscure offenses that rarely generated arrests in other jurisdictions or past eras, SFPD should provide the exact criminal codes for these youth arrests. 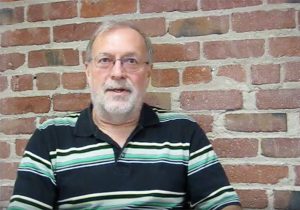 Second, while SFPD reports 974 youth arrests in 2017, the San Francisco Juvenile Probation Department reports receiving just 551 petitions from the District Attorney for juvenile arrestees. Given prosecutorial discretion, the release of some mistakenly arrested juveniles, and the time lag between arrest and petition, we would expect some divergence between police and probation department numbers – but not the large difference we see today. Since 2003, the proportion of juvenile arrest petitions reported by the probation department compared to arrests reported by SFPD has fallen from 98 percent to 57 percent. What happened to more than 400 arrested youths in San Francisco in 2017 who apparently were not referred to juvenile probation?

The SFPD’s increasingly haphazard reporting prevents accountability in terms of what offense police even arrest youths for, raises major questions about their validity and distorts local and statewide numbers. Importantly, the SDPD’s reporting gaps extend to adult arrests as well. The SFPD reports much higher than average proportions of adults arrested under unspecified codes (30 percent of the state’s unspecified felonies, and 5 percent arrested for unspecified misdemeanors) compared to other jurisdictions.

The SFPD’s deficient statistical practices severely hamper transparent analysis, especially with regard to youth arrests. Supervising agencies, which have passively allowed this situation to deteriorate, should take steps to bring SFPD arrest reporting by race, ethnicity, and offense into line with statewide standards, to hold the SFPD and SFJPD accountable for explaining their discrepant statistics, and to correct any past error.

Editor’s note:  Author Mike Males contacted the SFPD for additional information on the unspecified categories  but they have yet to reply.

Mike A. Males is a Senior Research Fellow at the Center on Juvenile and Criminal Justice (CJCJ), where this essay first appeared. Dr. Males has a Ph.D. in Social Ecology from U.C. Irvine and over 12 years of experience working in youth programs. He is also content director of Youth Facts.