Many nations have trouble admitting they have committed crimes against humanity – Japan is one of them. 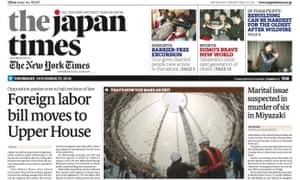 Japan’s oldest English-language newspaper has sparked anger among staff and readers after revising its description of wartime sex slaves and forced labourers from the Korean peninsula.

In a decision that critics said aligned it with the conservative agenda of the prime minister, Shinzō Abe, the Japan Times said it had used terms “that could have been potentially misleading” when reporting on the contentious subjects.

In September 2016, a cluster of seven kayakers with clinical symptoms of leptospirosis with onset since July 2016 was reported to French health authorities. Human and animal investigations were undertaken to describe the outbreak, identify the likely place and source of infection and implement necessary control measures. We identified 103 patients with clinical symptoms of leptospirosis between 1 June and 31 October 2016 who lived in the Ille-et-Vilaine district in Brittany. Of these, 14 (including the original seven) reported contacts with the river Vilaine during the incubation period and were defined as outbreak cases: eight were confirmed by serology tests or PCR and six were probable without a laboratory confirmation for leptospirosis. All 14 cases were kayakers. Three distinct contamination sites were identified on a 30 km stretch of the river Vilaine. Nine cases reported having skin wounds while kayaking. None were vaccinated against leptospirosis. The outbreak was attributed to Leptospira kirschneri serogroup Grippotyphosa. Animal investigations did not allow identifying the possible reservoir. Leptospirosis outbreaks associated with freshwater sports are rare in temperate climates. The prevention of such outbreaks requires control of potential animal reservoirs in zones such as the Vilaine valley and that kayakers adopt the recommended individual prevention measures.