On the 25th of November, Ukraine and Russia were involved in one of the most serious confrontations of the almost 5-year long conflict between the two countries. Russian Navy vessels first rammed and then later fired on and captured three Ukrainian Navy vessels, marking the first time Russian-flagged military units had officially attacked those of Ukraine.

Like many events in this conflict, both sides put out conflicting stories of what happened, as well as statements accusing the other of breaching international law. But what can we say for certain happened?

The opening act of the clash between the two navies began around 07:00 Russian time. Three Ukrainian Navy vessels – the Gyurza-M-class artillery boats ‘Berdyansk’ and ‘Nikopol’ and the tugboat ‘Yany Kapu’ – sailed towards the Kerch Strait, aiming to transit to the Ukrainian port of Mariupol. At around this time, they were intercepted by Russian Coast Guard vessels including the ‘Don’ and the ‘Izumrud’.

At this point, the clarity of the picture begins to break down. Russia’s Federal Security Service (FSB) claims that Russian vessels attempted to hail the Ukrainian ships and ask them to turn back, as they were not allowed to transit the Kerch Strait without a Russian navigator on board. The Ukrainians, for their part, claim they were illegally intercepted and had the right to free navigation through the strait.

As to what happened next, we need to analyse several primary sources. The first of these is an alleged communications intercept released by the Security Service of Ukraine (SBU). In it, several groups of Russian naval officers discuss the events which took place. There is no specific timeframe given, and it appears that the intercept is a collection of several recordings between different people forming seven discrete conversations.

Video 1: Intercepted Russian communications from the 25th of November released by the SBU.

Another piece of evidence is a video showing the Russian ship ‘Don’ appearing to intentionally ram the Ukrainian tug ‘Yany Kapu’. This footage can be seen below.

From this footage, several things can be seen. First, the identity of the boat which the video was shot from can be determined from the distinctive off-set 30mm autocannon seen at 0’51” in the footage, which is also present on the preexisting photos of the ‘Don’. Second, the approximate time of day that the video was shot can also be determined. In the footage, it appears to be shortly after sunrise. According to SunCalc, sunrise on the 25th of November in this area was at 7:46. As such, the video must have been shot within around an hour after sunrise the given the relatively low position of the sun in the sky. As well, in the video, a voice (presumably that of the pilot of the ‘Don’) shouts “eight twenty-one (08:21)” immediately after the collision. It is likely this is the time of the collision and appears to converge with the timeframe suggested by the solar position.

This is further backed up by an apparently unnoticed detail in the video. In it, the tug ‘Yani Kapu’ has already sustained damage from at least two individual strikes. This would confirm that it happened after the 07:35 and 07:44 strikes mentioned in the SBU intercept video. Photos of these areas of damage, when compared to a photo of the undamaged ship taken just a day before can be seen below.

Image 1: FSB photo of the undamaged tug ‘Yani Kapu’ on the 24th of November

Image 2: Damage sustained to the starboard stern of the ‘Yani Kapu’. (screenshot from ramming video)

Image 3: Damage sustained to the starboard midship of the ‘Yani Kapu’. (screenshot from ramming video)

Notably, following this video, the Yani Kapu was struck at least one more time. Video released by Telekanal Zvezda shot an hour or two later in the morning, when the sun was higher in the sky, shows that the tug has sustained additional damage to its port stern, which was not present either in the ramming video or the image taken of the Yani Kapu on the 24th of November.

Further evidence also backs up information from the SBU intercept. Images released by Kerch.FM show damage sustained by the Russian Coast Guard ship ‘Izumrud’. The location of this damage (high on the starboard midship area) is consistent with a strike from a Russian vessel larger than the smaller Ukrainian boats. As well the long scar along the side of the ship is inconsistent with weapons damage. This fits in with the SBU tape wherein a collision between ‘Izumrud’ and another Russian vessel is discussed.

Image 5: Damage to the Russian Coast Guard vessel ‘Izumrud’ sustained in a collision with another Russian ship. (Via Kerch.FM)

As the day continued, Russian Coast Guard vessels continued blocking manoeuvres against the three Ukrainian ships. A large cargo vessel was used to physically block the narrow passage under the Kerch Bridge, and a separate group of three Ukrainian naval vessels in the Sea of Azovwas forced to return to their base in Berdyansk.

Little information exists for what transpired over this period, however, the SBU intercept recording suggests that one of the Russian Coast Guard vessels took on a complement of 10 special forces soldiers to assist in later actions.

Image 6: Comparison of the large red ship in Zvezda footage and an image of the bulk carrier ‘Aviona’

The aforementioned Telekanal Zvezda video also contains another piece of useful information. In the first few seconds of the video, a bulk freight ship identified as the ‘Aviona’ can be seen within a few hundred meters from one of the Ukrainian armoured artillery boats. Using ship-tracking website MarineTraffic, we can determine that the ‘Aviona’ was at anchor in the Kerch Strait in effectively the same location for the entirety of November 25. This gives us a new data point for the location of the Ukrainian ships later in the day, much further north than previous positions.

Image 7: Locations of the bulk carrier ‘Aviona’ on the 25th of November (Source: MarineTraffic)

Under the 1982 United Nations Convention on the Law of the Sea (UNCLOS) which Ukraine and the Russian Federation are parties to, territorial waters extend at most 12 nautical miles (22.2 km; 13.8 mi) from the baseline (usually the mean low-water mark) of a coastal state. Notably, this additional position near the ‘Aviona’ shows a Ukrainian vessel within not just the territorial waters of Crimea, but also mainland Russia.

It is also worth noting that Ukraine, as well as most Western countries, does not recognise Russia’s annexation of Crimea, and by extension its territorial sea. Moreover, Ukraine has cited a 2003 agreement with Russia that denotes the Sea of Azov and the Kerch Strait as a shared waterway, allowing free passage.

After 18:00 local time, however, the Ukrainian ships attempted to leave the area, and return to their home port of Odessa. They were, by all accounts pursued, intercepted, fired on, and boarded. Several Ukrainian soldiers were injured and the ships were later captured by Russian Naval forces.

The Russian FSB released a detailed timeline of the events of the day, including a number of geographical positions in which key events occurred. These events are plotted on the map seen below.

Image 8: Timeline of the events and key positions according to the FSB.

The Russian FSB makes that point that the initial interception, as well as the warning shots, and finally the shots which hit the ‘Berdyansk’ all took place within the ‘territorial waters of Russia’. This does not align with the location data they themselves released.

Image 9: Distance between the location where the ‘Berdyansk’ came under fire according to the FSB, and the coastline of Crimea.

As can be seen in the above image, the FSB data, if correct, shows that the ‘Berdyansk’ was 22.72km from the coast of Crimea, and more than 500m outside of Russian territorial waters when it came under fire.

Ukraine for its part provided less detailed information regarding key locations during this period.

Image 10: Ukrainian release showing the locations of the capture of the three ships.

Unfortunately, while Ukraine asserts that its ships were outside of the 12 nautical mile UNCLOS limit, even if their location data is taken at face value, it is inconclusive. This is due to the fact that they only provided 4-digit locations. Such locations do not pinpoint a single point but rather a rectangle approximately 1.8 km on the N-S axis and 1.3km on the E-W axis. Given this level of imprecision, the positions could be potentially within, or outside of the 12 nautical mile limit. Ukraine likely does has access to more precise location data, and could make this public if it wishes to add clarity.

Additionally, an alleged mayday call released by Ukrainian publication Liga Novosti from one of the three Ukrainian vessels includes the audio “How many wounded do you have? I need help! I need help! Mayday! Mayday!” followed by the coordinates N 44° 51’ 00’’, E 36° 23’ 04’’. This location is southwest of the position Russia claims it fired on the ‘Berdyansk’, and is also outside of the 12 nautical mile limit, and thus in international waters.

As for the details of the confrontation itself, we again fall back on statements by both Ukraine and Russia, in lieu of primary sources. Interestingly, neither country’s statements contradict the other aside from their positions relative to the territorial waters line. Both sides claim that Russian forces shot at and crippled the ‘Berdyansk’, capturing it and the tug Yani Kapu shortly after. Initially, the Ukrainian military claimed that both the ‘Berdyansk’ and the ‘Nikopol’ ships had been damaged, before clarifying at 23:20 (Russian time) that only the ‘Berdyansk’ was hit. 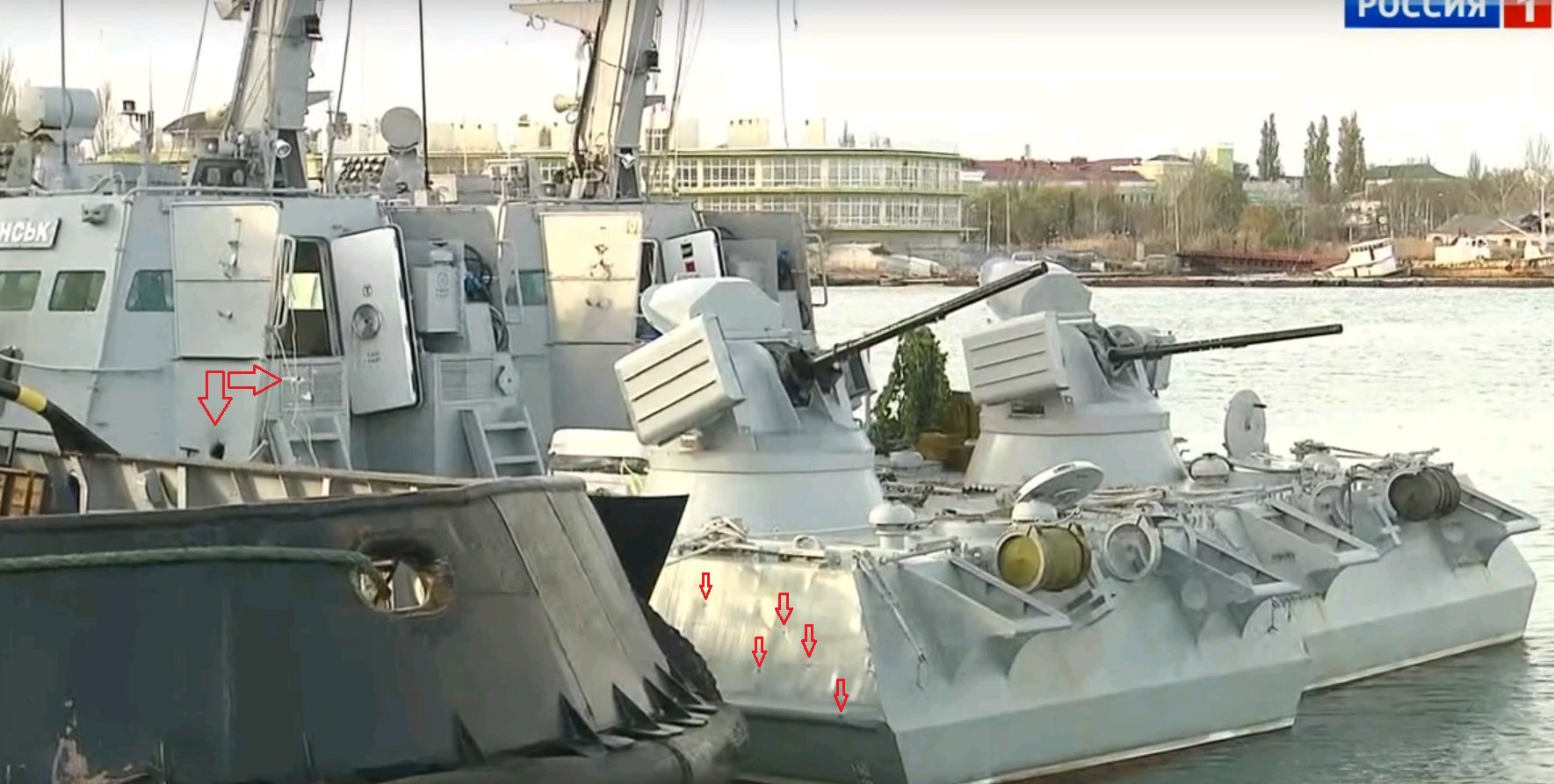 Photos of the Ukrainian ships in port in Kerch post-capture show many small calibre bullet holes in the ‘Berdyansk’ as well as at least one large calibre hole in its bridge. This larger hit especially confirms that Russian forces were not shooting to disable the vessel, but rather to harm the crew. The FSB release itself notes that the Russian Coast Guard vessel ‘Izumrud’ issued threats to the ‘Berdyansk’ that “weapons to kill” would be used if the vessel did not comply with its request to stop.

Image 12: Interactive map showing key positions and events from the 25th of November

From this information, several things are made clear. Firstly, based on geolocated video footage, Ukrainian ships did enter Russian territorial waters, both that of Crimea and mainland Russia in the Kerch Strait. Ukraine nonetheless argues this was legally permissible due to the 2003 agreement between the two countries. Secondly, we can say that the Ukrainian tug ‘Yani Kapu’ was intentionally rammed at least four times over a period of at least an hour. Thirdly, based on information provided by the Russian FSB which appears to incriminate themselves, the shooting of the ‘Berdyansk’ most likely took place in international waters.