It said that Trump, a White House adviser and the eldest daughter of the president, sent hundreds of emails about White House business and her official schedule to administration aides, Cabinet officials and her personal assistants.

White House ethics officials discovered this as they reviewed emails gathered last fall by five Cabinet agencies. The agencies were gathering the emails as they prepared to respond to a public records lawsuit.

In their review, the officials found that Trump discussed business from the White House while using a private email account, the Post said. Russia said it opened fire after the Ukrainian ships illegally entered its territorial waters. The European Union and NATO called for restraint on both sides to de-escalate the situation.

The baseball commissioner’s office has its own political action committee and donates to politicians on both sides of the aisle to help promote its causes in Congress, like protecting M.L.B.’s antitrust exemption and other legislation, like how teams pay minor league players. Charles Johnson, an owner of the San Francisco Giants, also made contributions to Hyde-Smith. He and his wife Ann each donated $2,700 through a super PAC. In a statement, Johnson said he was unaware the contribution would be used to support Hyde-Smith. “I had absolutely no knowledge that this donation would be used in this manner and I, like the Giants organization, strongly condemn any form of racism and in no way condone the advertisement that was created by this entity.”

rogue or intentional? Trump, of course, will follow Putin’s orders on comment or response Russia’s FSB security service said early on Monday its border patrol boats had seized three Ukrainian naval vessels in the Black Sea near Crimea on Sunday and used weapons to force them to stop, the RIA news agency reported.

Ben,
1. Russia has been the persistent aggressor.
2. Russia has for long tried to cut off Sea of Azov.
3. Now Russia is acting hard & fast in multiple ways, while the West is asleep.
4. How could Ukraine possibly want to provoke Russia. Check how Russia usually starts wars! 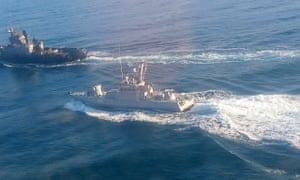 The Ukrainian navy has accused Russia of opening fire on its ships in the Black Sea, injuring two crew members, and said Russian special forces have seized three of its vessels.

The Ukrainian president Petro Poroshenko has called an emergency meeting of his war cabinet in response to the incident, according to reports. Russia has so far not responded to the incident.

Russia has escalated the conflict in Ukraine by blocking the Kerch Strait between the Azov and Black Seas. This comes after Russia rammed a Ukrainian tug boat helping escort Ukrainian naval vessels from Odessa to the port of Mariupol. https://www.unian.info/society/10351302-russia-blocks-kerch-strait-between-azov-and-black-seas-two-ka-52-attack-helicopters-scrambled-video.html … 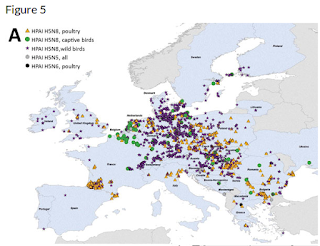 The record setting 2016-17 epizootic of HPAI H5 was not the first incursion of a Guangdong lineage HPAI H5 virus into Europe, but it was the largest, and the most damaging.

And almost from the beginning, it was obvious `something‘ was very different about the 2016 virus (see Nov 14th, 2016’s Europe: Unusual Mortality Among WIld Birds From H5N8).

In early January of 2017 we learned that the H5N8 virus had reassorted – likely over the previous summer somewhere in Russia or Mongolia  – producing a new, more virulent virus (see EID Journal: Reassorted HPAI H5N8 Clade 2.3.4.4. – Germany 2016).

About the same time, we were also starting to see spin offs of new HPAI subtypes via reassortment (see HPAI H5N5 Detected In German Poultry Operation). 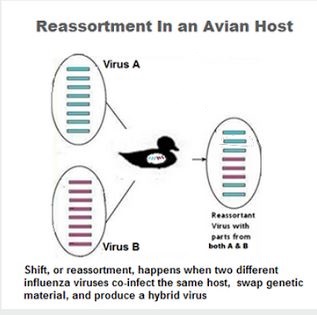 In addition to being far more virulent in wild and migratory birds, this reassorted virus also displayed the ability to infect a much wider range of birds (see ESA 2017 list of 78 species).

Instead of burning itself out quickly – as we’d seen with previous epizootics in both Europe and North America (see PNAS: The Enigma Of Disappearing HPAI H5 In North American Migratory Waterfowl) – this new H5N8 virus  showed remarkable persistence and geographic spread – making it’s way into the Middle East, West and Central Africa that same winter, and even the Southern Hemisphere the following spring. 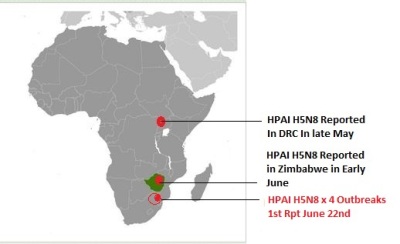 While we’ve seen a handful of analyses ascribing unusual qualities to this 2016 reassorted HPAI H5 virus, the December edition of the CDC’s EID Journal has the most in depth look to date at how Europe’s 20016/17 epizootic differed from previous incursions of the virus.

I’ve only included a few brief snippets from the full review, so follow the link to read it in its entirety.

We analyzed the highly pathogenic avian influenza (HPAI) H5 epizootic of 2016–17 in Europe by epidemiologic and genetic characteristics and compared it with 2 previous epizootics caused by the same H5 Guangdong lineage. The 2016–17 epizootic was the largest in Europe by number of countries and farms affected and greatest diversity of wild birds infected.

We observed significant differences among the 3 epizootics regarding region affected, epidemic curve, seasonality, and outbreak duration, making it difficult to predict future HPAI epizootics. However, we know that in 2005–06 and 2016–17 the initial peak of wild bird detections preceded the peak of poultry outbreaks within Europe.

This study highlights the unprecedented magnitude of the 2016–17 HPAI H5 epizootic in Europe, in terms of size (both number of poultry outbreaks and wild bird incidents), geographic spread, speed of incidents/outbreaks, and diversity of wild bird species reported infected. As a result, the economic impact is many times higher for 2016–17, which resulted in an >8-fold increase in poultry that died or were culled.

The extent of the 2016–17 H5 epizootic indicates an urgent need to reappraise the effectiveness of surveillance strategies in both wild and domestic birds and to monitor key populations for emergence of viral variants. The differences we observed in the 3 epizootics illustrate the difficulty of predicting HPAI epizootics. However, the temporal peak of wild bird detections preceding the peak of poultry outbreaks at the EU level highlighted the utility of surveillance in wild birds, as observed in other studies (29).

The spatial corridors of HPAI we identified may provide the basis for an increase in targeted surveillance to improve system sensitivity. Although the H5N8, H5N5, and H5N6 European-reassortant viruses have not been shown to infect humans and remain avian influenza–like strains with no evidence of key mammalian adaptation markers (27), their genetic volatility represents a potential threat that requires continuous monitoring and surveillance of virus incidence and genetics to continue to protect public safety.

Dr. Alarcon is a lecturer in animal health economics at the Royal Veterinary College, London. During this study, he was a veterinary epidemiologist at the Animal and Plant Health Agency, United Kingdom, where his role and research focused on the analysis of avian influenza surveillance data in Europe.

While Europe’s HPAI H5N8 was largely supplanted over the winter of 2017/18 by a less virulent HPAI H5N6, it continues to cause outbreaks – and interact with other avian viruses –  in Russia, Bulgaria, the Middle East, and Africa.

Despite Europe’s current lull in activity, HPAI H5’s persistence – and its proclivity for reassorting with other viruses – means we can’t know what the future holds for this lineage, or its descendants.

But if the recent past is any guide, with the rapid emergence and evolution of avian flu viruses over the the past decade, we may not have to wait long to find out.