For months, Turkish officials have been leaking gruesome details surrounding Jamal Khashoggi’s death as a counter to President Trump’s moves to absolve Saudi Crown Prince Mohammed Bin Salman, the Trump ally thought to be behind the Saudi journalist’s slaying.

The mayor of Tijuana has declared a humanitarian crisis in his border city and said Friday he was asking the United Nations for aid to deal with the approximately 5,000 Central American migrants who have arrived.

A Guatemalan migrant separated from her daughter at the border has been told she faces the possible loss of her parental rights, in part because her daughter was born in the United States.

Democrats on the U.S. House intelligence panel will investigate U.S. President Donald Trump’s response to the murder of journalist Jamal Khashoggi as part of a “deep dive” next year into U.S.-Saudi Arabia ties, the committee’s incoming head said in a report published on Friday.

Every storm has a few holdouts, who ignore evacuation orders and hunker down at home. In the case of Kevin Jeys, he stuck it out to save his animals.

The country is hoping to add the genre to Unesco’s list of the intangible cultural heritage of humanity, an honor that would bring reggae more recognition.

Spain has rejected an offer from the European Union to create a declaration to clarify the situation of Gibraltar after the United Kingdom leaves the EU in the process commonly known as “Brexit.”

The day after President Trump’s election in 2016 — according to Documenting Hate, a project that tracks bias incidents around the country — a student reportedly told a seventh-grade girl in Clarksburg, W.Va., “You’re going back to Mexico now.” The girl’s father is Native American and she is not of Mexican descent. Her skin is darker, the report noted. Later that month, a woman reported that she was in line at a grocery store in Austin, Texas, when an older man picked up a newspaper with a picture of a Latino man. “Trump is going to get rid of you people,” she said he exclaimed before shaking the paper at her. The woman was white, but had darker skin. For many Latinos, the Trump era has hammered home the privilege, or lack thereof, that comes from being the light-skinned güero or dark-skinned prieto of the family.

Hate and foolishness have consequences. 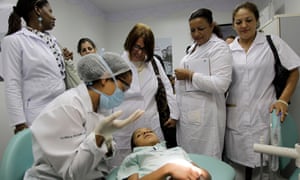 Cuba has begun withdrawing 8,300 doctors working in some of the poorest regions of Brazil, prompting fears that indigenous villages, small towns and isolated rural communities could soon be left without medical care.

The move came after Brazil’s far-right president-elect Jair Bolsonaro threatened to cut relations with Cuba and modify the conditions of a five-year-old agreement between the two countries and the World Health Organisation. The growing row offers a worrying sign of how the former army captain may handle diplomacy after assuming office on 1 January.