President Trump said California can learn from Finland on how to fight fires.

But the fires that burned Paradise and parts of Southern California are significantly different from the forest fires that hit Finland last year.

In an interview this week, Jonathan Pangburn, a fire behavior analyst for…

wtf He made these remarks while talking to journalists at his office in Islamabad on Friday. Critics in Pakistan have attacked Prime Minister Khan for backing out from most of his pre-election political positions and promises made to the country. 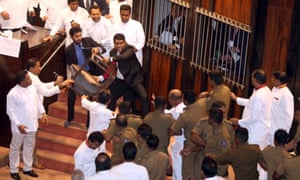 Ranil Wickremesinghe, who until three weeks ago occupied the prime minister’s office, had been in the building that day, he reminded journalists on Friday. “I’ve been here when a bomb was thrown,” he said. Even so, the scenes in Sri Lanka’s parliament this past week have been shocking, he said. “This is the breaking-up of parliament by a group of people claiming to be the government.”

Businessman sought Trump strategist’s help to raise funds for Leave.EU in the US

By Bar Gissin and Maya Haber

Something remarkable happened in the last few weeks: progressive candidates won elections in Israel and the United States, despite the rise of far-right, anti-democratic politics in both countries.

This might come as a surprise, but it shouldn’t be. Many Jewish Israelis support ending the occupation, women’s right to pray at the Wailing Wall, and LGBTQ’s right to get married and adopt children. Similarly, most Americans approve of labor unions, support same-sex marriage, want stricter gun control, and oppose illegalizing abortions.

So why do the policies of the Israeli and American governments fail to reflect voter demands?

The reason is simple: President Trump and Prime Minister Netanyahu use fear to channel voter anxieties. Just look at how Trump repeatedly labels refugees as criminals and belittles their claims of persecution to mobilize the Republican base. Similarly, for the past 20 years, Netanyahu has been stoking existential fears, warning of attacks by Iran and Hamas in Gaza. Countering this hate has trapped liberals and progressives in a defensive, apprehensive posture, leaving little space to push a proactive agenda forward.

However, the progressive campaigns in recent Israeli municipal elections and American midterms provide a promising off-ramp. Progressives in each country enlisted volunteers and built local grassroots campaigns that proved stronger than fear and hatred. Activists in both countries knocked on doors, spread their agenda, and dispelled red-baiting from conservative candidates.

In Pittsburgh, Pa., for example, the Republican opponent of state senator-elect Lindsey Williams desperately turned to Cold War-style red-baiting and tried to label Williams as a socialist. Such farcical tactics fell flat, as Williams’ canvassers directly appealed to voters’ support for workers’ rights and Medicare for All. Progressives scored victories across the U.S. with similar appeals, electing democratic socialists like Alexandria Ocasio-Cortez, Julia Salazar, Franklin Bynum and Rashida Tlaib to Congress.

In Israel’s recent municipal elections, progressives won even in the most unlikely communities. In October, the Left-leaning Meretz-Mekomi party became the largest party in Rosh Ha’Ayin. The Mekomi-Local Leadership movement was established two years ago to form a network of local elected officials and promote progressive values in municipalities. In Rosh Ha’Ayin, it collaborated with the left-wing Meretz party and ran as Meretz-Mekomi.

Rosh Ha’Ayin is a suburb of some 50,000 inhabitants, 15 miles east of Tel Aviv. The population is mostly conservative and religious, and tends to vote for center-right candidates. In the 2015 national election, Benjamin Netanyahu and his Likud party overwhelmingly won the elections there. At the time, only 576 Rosh Ha’Ayin residents voted for Meretz. In 2018, however, Meretz-Mekomi received 4,872 votes — a nearly tenfold increase that led to three seats on the Rosh Ha’Ayin city council.

Meretz-Mekomi did not to make itself electorally palatable by pandering to conservative voters. Instead, they articulated a clear progressive agenda. Meretz-Mekomi utilized local focus groups to write its platform, and advanced a diverse and equal pool of candidates. They campaigned on equal allocation of resources, religious pluralism, fair and affordable education, accessible public transportation and open businesses on Shabbat, among other progressive issues.

Members of the LGBTQ community and supporters participate in a protest in Tel Aviv against a Knesset bill amendment denying surrogacy for same-sex couples, on November 1, 2018, 2018. (Miriam Alster/Flash90)

Meretz-Mekomi won in Rosh Ha’Ayin because it carried out a year-long grassroots campaign. This was quite unprecedented in Israel because few campaigns, even on the national level, take longer than three months. Meretz-Mekomi in Rosh Ha’Ayin bucked this norm by taking a year to identify and listen to voters, knock on doors, and organize get-to-know-the-candidate events. In addition to Rosh Ha’Ayin, Mekomi leaders did this in eight other municipalities.

Mekomi’s experience in municipal elections in Israel and recent progressive wins in the U.S. midterms prove that the future is not lost. Voters are receptive to progressive agendas, even if they don’t identify as such. If we learn from the local experience, and propose bold, authentic, progressive platforms that stand on their own, rather than as a reaction to right-wing fear-mongering, we can reproduce these victories on the national level, and change the political reality both in Israel and the United States.

Bar Gissin is the national chairperson of Young Meretz and leader of the Mekomi-Local Leadership movement. Dr. Maya Haber is the founder of Israel Forward, a nonprofit consultancy.

The post In the age of Trump and Netanyahu, progressive values are winning appeared first on +972 Magazine.

Since the moment President Donald Trump appointed Matthew Whitaker as Acting Attorney General on Wednesday, November 7, the move has been met with significant political and legal criticism, with numerous lawyers and commentators arguing that the president lacked both statutory and constitutional authority to name Whitaker—previously chief of staff to Attorney General Jeff Sessions—as Sessions’ interim successor. That argument may soon receive a conclusive resolution, thanks to an unusual motion filed in the Supreme Court late on Friday afternoon.

The movant, Barry Michaels, brought suit in March of 2016 against the attorney general and another senior government official seeking to challenge the constitutionality of the federal ban on possession of firearms by convicted felons. After losing in the lower courts, Michaels filed a petition for certiorari on June 27, in which the solicitor general’s response is currently due on December 17. But in a filing late Friday afternoon, Michaels—who is represented by Florida lawyer Michael Zapin and a team of lawyers from Goldstein & Russell, P.C., led by SCOTUSblog founder Tom Goldstein—moved the justices to “substitute” the appropriate successor to Sessions, who was one of the respondents to Michaels’ petition.

As the motion explains, the court’s rules usually provide for automatic succession of government-officer parties upon the prior officeholder’s departure. But “that practice is premised on the ability of this Court to identify the correct successor, so that any judgment or Order of the Court is directed to the correct individual.” Here, however, the dispute over the validity of Whitaker’s appointment means that “the identity of the successor is both contested and has important implications for the administration of justice nationally. This Motion seeks to resolve the dispute.” Michaels’ motion argues that the dispute ought to be resolved against the validity of Whitaker’s appointment—largely on the ground that the Federal Vacancies Reform Act of 1998 does not override or otherwise displace the mandatory order of succession set forth in the Department of Justice succession statute, codified at 28 U.S.C. § 508. And even if it did, the motion argues, the appointments clause of Article II of the Constitution does not allow for officials who have not been confirmed by the Senate to exercise the functions of a principal office, like the attorney general, on a temporary basis so long as no exigency precludes another, Senate-confirmed officer from doing so.

The motion concedes that “no characteristic of this case distinguishes it from any other in which Mr. Sessions was a named party” and that no lower court has yet addressed the issue. Nevertheless, the motion urges the justices to resolve the issue now because “[t]here is a significant national interest in avoiding the prospect that every district and immigration judge in the nation could, in relatively short order, be presented with the controversy over which person to substitute as Acting Attorney General.”

The justices have repeatedly reasserted that the Supreme Court is one of “review, not of first view.” Other challenges to the validity of Whitaker’s appointment have already been brought in contexts in which the acting attorney general is more than just a named party. And the U.S. Court of Appeals for the District of Columbia Circuit has ordered supplemental briefing as part of a challenge to the validity of Special Counsel Robert Mueller’s appointment and investigation as to whether the identity of Mueller’s current supervisor bears on the matter—and, if so, who it is. This issue therefore seems likely to reach the Supreme Court eventually. But the Michaels motion asks the justices whether they really want to wait that long. If they do not, then formally identifying the proper respondent to a petition for certiorari would certainly allow them to settle the matter once and for all.

[Disclosure: Goldstein & Russell, P.C., whose attorneys contribute to this blog in various capacities, is among the counsel to the petitioner on this motion. The author of this post is not affiliated with the firm.]

Pence-speak is just as bad as Trump-speak! The United States will not back down from its trade dispute with China, and might even double its tariffs, unless Beijing bows to U.S. demands, Vice President Mike Pence said on Saturday.

The NPR host offers 8 spicy tips for having better conversations.

The Camp fire is by far the worst wildfire in recorded California history. By Thursday evening, the blaze had chewed through 141,000 acres and 11,862 structures, destroying an entire town in hours. Officials said it could take weeks to complete the search for victims. Thousands of survivors are without homes, living in shelters and tent cities.