Protesters in Rome say they have had enough of the garbage on the streets, broken infrastructure and crime in the country’s capital.

While Hawaii and Alaska are the two states most often associated with volcanic eruptions, 11 of the 18 very highest threat volcanoes on U.S. soil are located in the Western United States – 4 in Washington, 4 in Oregon & 3 in California. (note: Yellowstone is ranked 21st).

In addition, 39 volcanoes are listed as posing a `high threat’, and 49 are ranked as a `moderate’ threat.  These are not predictions of which volcanoes are apt to blow next, as explained below:

The updated national volcanic threat assessment presented here is not a forecast or indication of which volcanoes are most likely to erupt next. Rather, it is an indicator of the potential severity of impacts that may result from future eruptions at any given volcano. As such, the assessment can be used to help guide and prioritize volcano research, hazard assessment, emergency planning and preparation, and monitoring efforts by Federal, state, and local government.

We’ve discussed eruptive hazards before – both internationally (see here, here, and here), and domestically (see Washington State: Volcano Awareness Month). While earthquake damage is generally localized, volcanic eruptions (and tsunamis) can affect property and populations thousands of miles away.
All of which means you don’t have to live in the shadow of one of these slumbering giants to be impacted by an eruption.

The 40 page 2018 update to the U.S. Geological Survey national volcanic threat assessment and summary are available at this USGS link.

The Pacific Northwest is particularly ripe for a large seismic event, tsunami, and/or volcanic eruption.  A topic we’ve explored previously in:

OSU: Pragmatic Action – Not Fatalism – In Order To Survive The `Big One’

Today I’d also like to call your attention to a recent (August 2018) TEDxPortland talk, presented by Steven Eberlein, on Why we do not prepare for earthquakes.
While the advice and information presented in this entertaining 10-minute talk should be of value to everyone, if you live anywhere near the Pacific Northwest, it should be at the very top of your viewing list. Romans are counting on their mayor to resign as the city falls into a steep decline in both safety and public services. Besides its crumbling infrastructure, the city is also reeling from the brutal murder of a teenager.

President Maithripala Sirisena temporarily suspends parliament a day after sacking the prime minister and replacing him with a former strongman seen as being close to China.

Occupiers, dictators, and fear mongers all need scapegoats… The Israeli military said Syria had also played an unspecified role in the rocket fire from the militant group Palestinian Islamic Jihad.

Squirrel Hill will continue to live by the values that Jews have sustained for more than 2,000 years. They can never be gunned down.

They don’t need return of a fascist! 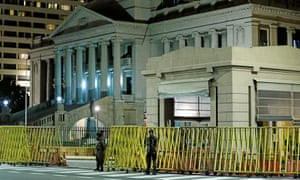 Sri Lanka has been plunged into constitutional crisis as two men claim to be its lawful prime minister, one of them the strongman former president Mahinda Rajapaksa.

The current president, Maithripala Sirisena, announced late on Friday that he had sacked the prime minister, Ranil Wickremesinghe, and replaced him with Rajapaksa, whose 10-year rule was marred by allegations of forced disappearances, brutality and creeping authoritarianism. Yesterday Sirisena suspended parliament until mid-November, stopping Wickremesinghe calling an emergency vote to challenge the decision.

Responses to the three attacks have been predictable. Far-right pundits and websites claimed the pipe bombings were a “false flag” operation, continuing to spread bizarre conspiracy theories even after the suspect was arrested. Conservatives pulled out their usual “crazy person” defense, calling attack after attack an “incident”. Trump functioned, as always, as the amplifier-in-chief, initially suggesting a false flag operation with regard to the pipe bomber and calling the Pittsburgh shooter “a maniac”, before using the tragedy to call upon houses of worship to arm themselves and to openly muse about the importance of reinstating the death penalty – nationwide, I assume. Advertisement The media played its usual role, too. Don’t even try to look for the words “terror” or “terrorist”. The suspects are “attackers” or “shooters” and journalists bend over backwards to not “jump to conclusions” on their motives. Instead, they are happily speculating about their mental health, as if that would exclude the possibility of far-right terrorism.

ROTFLMAO and sad at same time. 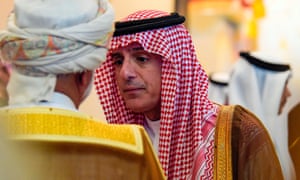 Saudi Arabia’s foreign minister has described the kingdom as a “vision of light” in the region as it tries to control the fallout from Jamal Khashoggi’s killing – its biggest diplomatic crisis since the 9/11 attacks.

After more than two weeks of international outrage over the journalist and dissident’s death, Adel al-Jubeir sought to portray the country as the moral beacon of the Middle East, in stark opposition to Iran, Saudi Arabia’s arch-rival.

Trump told reporters later in the morning the killings might have been prevented if there had been an armed guard in the building. “If they had some kind of a protection inside the temple maybe it could have been a much more different situation, they didn’t,” he said when asked about a possible link to U.S. gun laws.