There comes a moment, when the barbarian is within, to draw a line, to say enough, to speak out, to make a stand whatever the cost. The desperation of mortality can also yield the lucidity of courage.

Two weeks ago, Sayoc threatened a former Democratic congressional spokeswoman on Twitter after her appearance on Fox News. The tweet warned her to “hug your loved ones real close every time you leave” home. The woman, Rochelle Ritchie, reported him to Twitter, but the company found he had not violated any conduct rules.

Prior vaccination did not reduce the subsequent season’s vaccine effectiveness in children 2 to 17 years old. A Virginia jury has spared the life of Iraqi war veteran Ronald Hamilton (pictured, right, with his father) in the 2016 killings of his wife and a rookie police officer. The jury split 6-6 on whether to impose the death penalty for Hamilton’s murder of his wife, Crystal Hamilton, but unanimously agreed to impose a life sentence for the death of Officer Ashley Guindon, who was killed while she responded to Crystal Hamilton’s 911 call. Under Virginia law, the court must impose a life sentence if any of the jurors vote for life. At the sentencing phase of the trial, Hamilton’s lawyers presented evidence of his possible posttraumatic stress disorder from two tours of duty in Iraq, emphasized his development into a model soldier who, as an Army sergeant, saved a colleague’s life while they were under mortar fire, and presented testimony from his father, Ronald W. Hamilton, and other family members. During his testimony, the elder Ronald Hamilton—a retired police officer whose career included service at the White House and who served as the second-in-command of the Charleston, South Carolina police force—expressed his sympathy to the family of Officer Guindon and to the two other officers who were wounded. “I see the prosecutor’s side and defense side, and I can sit on either side. I feel the pain. I understand the duty,” Hamilton testified. “If anyone in this courtroom had their relative sitting where my son was, they’d be asking for mercy,” he said. As is often the case in capital trials of war veterans, the prosecution had attempted to convert Hamilton’s military service into an aggravating factor, repeatedly referring to him as “depraved” and “dangerous.” Prosecutor Richard Conway told the jury that soldiers “deserve respect and deserve protection, but they don’t get a pass for capital murder,” while his co-counsel, Matthew Lowery urged the jury to “[p]ut him in the grave because that’s what he deserves.”

No Virginia jury has imposed a death sentence since 2011 and Hamilton had offered to plead guilty in exchange for a sentence of life without parole. However, Prince William County Commonwealth’s Attorney Paul Ebert – known for his frequent use of the death penalty – rejected the offer. The county is responsible for more executions since 1976 than any other county in the Commonwealth and is among the 2% of counties that account for a majority of all executions in the United States in that period.

The caravan is still thousands of miles from the U.S. but that hasn’t stopped Trump and his friends from declaring a new threat to the U.S. Without citing any evidence, and in complete contradiction of his own Department of Homeland Security Secretary, Trump this week claimed that ISIS and other terrorist groups have embedded themselves within the caravan, adding that “Middle Easterners” were mixed in among the refugees. No evidence exists to support that claim, and, when pressed for proof of his claims by a reporter, Trump finally admitted “there is no proof of anything”.

News
The only company drilling for shale gas in Britain temporarily suspended fracking Friday after a mild earthquake.

All dictator wannabes arrest or try to arrest those who shine light on what the wannabes are doing wrong! Israeli forces shot and killed at least four Palestinians and wounded 232, 180 of them from live fire, during protests along the border with Gaza on Friday, Palestinian medical officials said. 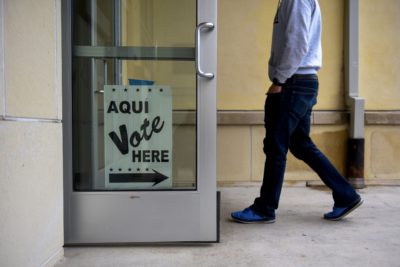 Tempers are flaring during early voting in Dallas County, Texas, and reports of voter intimidation are on the rise. The county’s nonpartisan election administrator said that the harassment — including name-calling and interrogating voters waiting in line — is the worst she’s seen in decades.

“I’ve been here for 30 years, and this harassment that’s going on, I haven’t ever seen the likes of this,” said Toni Pippins-Poole, the county’s election director. “I’ve seen some other things, props being used and whatnot, but nothing like this type of mentality or aggressiveness or demeaning type of actions.”

At the Lakeside Activity Center in Mesquite, Texas, election administrators received complaints of a partisan poll watcher looking over voter’s shoulders as they cast their ballots and questioning voters on their politics. The person was later escorted out by Mesquite Police Department officers on Monday after refusing to leave the premises, according to Pippins-Poole.

Texas law requires that any form of electioneering — including passing out political literature or advocating for or against candidates or issues — can only occur more than 100 feet outside a polling location. Within that distance, poll workers can kick people out for causing a disturbance. When the nuisance is farther away, Pippins-Poole instructs her poll workers to call law enforcement.

Stay Informed With the Daily Digest

Join 100,000 discerning readers and get everything we publish by signing up for ProPublica’s daily email.

Poll greeters at Dallas’ Lochwood Library reported being “harassed” and “verbally abused” and described a person with a bullhorn driving by yelling about “baby killers,” according to a tweet by the Texas Civil Rights Project, an organization tracking voting-related issues in the state. Despite notifying law enforcement, Pippins-Poole said the person has not been identified and the reports of harassment are ongoing.

At the Richardson Civic Center, multiple reports emerged of a person standing beyond the 100-foot-perimeter accosting voters as they arrived to vote, calling people “bipolar” and “alligators who live in swamps.” A video posted on Twitter by the Texas Civil Rights Project shows a person pacing and yelling about similar subjects.

There is currently no evidence to suggest that the incidents reported in Dallas County have blocked voters from casting a ballot. When harassment occurs, however, it can be particularly discouraging for those inexperienced with voting, said Calvin Jillson, a professor of political science at Southern Methodist University.

“If you are a first time voter — say a young voter or a minority voter, a newly enfranchised Hispanic citizen voting for the first time — and you have some aggressive white guy yelling at you as you walk in, it might have a negative effect. It’s meant to dissuade people from voting,” Jillson said.

The secretary of state’s office has been in regular contact with Dallas County election officials regarding issues of harassment and intimidation, according to Sam Taylor, the office’s communications director. In written statement sent to ProPublica, Rolando Pablos, Texas’ secretary of state, said “everyone should continue to treat their fellow Texans with dignity” whether inside or outside a polling location.

“We strongly condemn harassment of Texas voters in any form or fashion. We encourage Texans to make their voices heard at the ballot box, and to be respectful and courteous to other voters wishing to do the same,” Pablos wrote.

Tensions are high across Texas. The state is in the midst of an unexpectedly close Senate race between Republican incumbent Ted Cruz and Democratic challenger Beto O’Rourke, which has driven record-breaking registration and early voting turnout.