The second Proud Boy to be charged for last week’s violent clash between members of the group and protesters is a World Trade Center steel inspector, who prosecutors described as the “single most vicious” of the alleged attackers. [ more › ]

Khashoggi’s disappearance has come amid a particularly harsh and opaque crackdown on Saudi journalists and bloggers.

The crown prince, Mohammed bin Salman, issues another incredible explanation for the death of Jamal Khashoggi.

Threatening to kill or rape someone shouldn’t be banal. It should shock everyone who comes across such a threat. And that should go without saying, except that increasingly it doesn’t, not in a world where the president has said that he longed for the days when disruptive protesters were carried away from the scene “on a stretcher.” It’s perversely heartening to see that the apparent murder of the Saudi journalist Jamal Khashoggi seems to have temporarily interrupted business as usual. Such shock and outrage is crucial, because in a world where dissenters are dismembered, there’s no hope for change. The prospect that you’ll be killed for what you say makes discussion essentially impossible. A society in which critics fear death is a society with fewer critics, and hence with fewer chances for change.

As German Chancellor Angela Merkel joins those condemning the killing of Jamal Khashoggi, Saudi Arabia’s Justice Minister says the dissident journalist died on Saudi sovereign territory, in the country’s consulate in Turkey, making it a matter for Saudi courts. 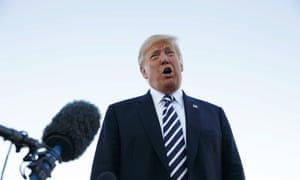 Donald Trump has confirmed the US will leave an arms control treaty with Russia dating from the cold war that has kept nuclear missiles out of Europe for three decades.

Related: Trump says he’d prefer to choose woman as US ambassador to UN

German Chancellor Angela Merkel condemned the killing of journalist Jamal Khashoggi in Saudi Arabia’s consulate in Istanbul and said explanations so far given of the circumstances of his death were inadequate.

A pharmacist at the supermarket chain Meijer is no longer employed at the company after blocking a woman from receiving a drug needed to expedite the miscarriage process.