Stalin was a good guy? Putin is the new mini-me Stalin 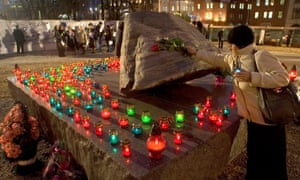 Memorial, the country’s oldest rights group, has held a 12-hour ceremony every year on 29 October for the past 11 years. Hundreds of people read out names of those killed during Stalin-era repressions at a memorial in Lubyanka Square, outside the headquarters of the current security service and its Stalin-era predecessors. Historians estimate about a million people perished in Stalin’s Terror, also known as the Great Purge, in the 1930s.