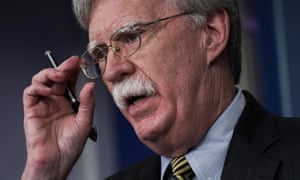 John Bolton is pushing for the US to withdraw from a cold war-era arms control treaty with Russia, in the face of resistance from others in the Trump administration and US allies, according to sources briefed on the initiative.

Bolton, Donald Trump’s third national security adviser, has issued a recommendation for withdrawal from the 1987 intermediate-range nuclear forces treaty (INF), which the US says Russia has been violating with the development of a new cruise missile.