“The Florida state Supreme Court said Monday that Gov. Rick Scott ® will not be allowed to appoint three new justices to the court on the morning he steps down as governor, after voting rights groups sued him over his plans to replace the three judges whose terms will come to an end at midnight before Scott’s successor is sworn in.

“’The governor who is elected in the November 2018 general election has the sole authority to fill the vacancies that will be created by the mandatory retirement of Justices Barbara J. Pariente, R. Fred Lewis, and Peggy A. Quince,’ the state Supreme Court said, ‘provided the justices do not leave prior to the expiration of their terms at midnight between January 7 and January 8, 2019, and provided that the governor takes office immediately upon the beginning of his term.’

“The retiring justices, who are stepping down due to mandatory age limits, are all left-leaning, according to Slate. In attempting a power grab that would have let him lock in a right-leaning majority for years regardless the winner of the 2018 governor’s race, Scott was trying to exploit a loophole in that their terms expired at midnight, January 8, but his successor wouldn’t be sworn in until that day, usually at around noon.”

Nikki Haley joked about President Donald Trump’s braggadocio in his UN speech last month. Once, she said, he asked if she belonged to the same Native American tribe as Senator Elizabeth Warren. And as a member of Trump’s cabinet, she added, “It is a thrill to be out to dinner without being harassed.”

ROTFLMAO!!! President Donald Trump said on Friday that Saudi Arabia’s explanation for how journalist Jamal Khashoggi died at its consulate in Istanbul was credible.

Governor Walker, an independent, said he could not win the three-way race next month. He threw his support to former Senator Mark Begich, a Democrat.

A criminal complaint offered a rare view into how Russian operatives tried to disrupt the American political process, including the midterm elections. 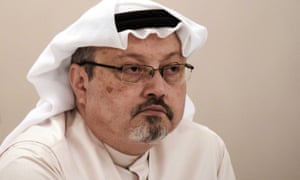 Saudi Arabia has said the journalist Jamal Khashoggi, who disappeared after visiting the country’s consulate in Istanbul on 2 October, is dead.

Related: Don’t let my friend Jamal Khashoggi’s death be for nothing | Wadah Khanfar

The “Campaign” Begins in Earnest On July 25, 2018, The Daily Caller, a right-wing news site part-owned by Tucker Carlson, published an article: “Trudeau’s Border Control Plan: Place Illegals in Hotels.” The next day Tucker Carlson himself covered the refugee situation at the Toronto East Radisson on Fox News. The video clip of the coverage uploaded to Fox’s YouTube account titles the segment, “Trudeau’s immigration solution: put illegals in hotels.”

Latino arts and culture events are in full swing throughout the county, with several worth seeing. Eight acclaimed films from Mexico will be shown on the big screen at North Park’s Digital Gym Cinema. In Carlsbad, telenovelas take centerstage in a play exploring death, grieving, and language and cultural barriers. In Fallbrook, the theme of “Sanctuary,” escaping violence and finding a safe place to live are the inspiration of an art exhibit.

The Media Arts Center San Diego’s Digital Gym Cinema, which also organizes the San Diego Latino Film Festival each year, is co-presenting a traveling film festival known as the Hola Mexico Film Festival. Eight of the most popular and acclaimed recently released movies in Mexico will be featured at festival running from October 19 – October 25. Each film is presented in Spanish with English subtitles. A list of the complete program is available on the Digital Gym Cinema’s website: https://digitalgym.org. Regular admission tickets cost $11, student, senior, and veteran tickets $8.50, and Digital Gym Cinema Member tickets $7.50.

Moises Esparza, programing manager for the Media Arts Center San Diego, commented on the Hola Mexico Film Festival in San Diego, “We are proud to be the official headquarters of this selection.”

Esparza also pointed out some of this year’s highlights, “Hola Mexico is full of movies never before released in our city as “Sacudete las penas” and “Eras mi pasión”, and also includes several titles such as “Los adioses” and VUELVEN that were among the highlights of the recent edition of the San Diego Latino Film Festival.”

“The selection is unforgettable and we are sure that it will please all those who love movies from Mexico,” Esparza added.

Oscar winner Guillermo del Toro has hailed “Vuelven,” and said it is one of the best Mexican films in recent years. The dark fantasy is a heartfelt genre which tells the story of a young 10-year-old who has three wishes, one of those is for her missing mother to return. The film takes off when that wish is granted.

“Sacúdete las penas bailando” is a story of passion and freedom. Set in the 1950s, the film tells the story of prisoner Pepe Frituras, the most famous dancer from Mexico condemned to spend his time behind bars. It takes place at the Lecumberri Palace, once one of the most dangerous prisons in Mexico, also known as the “Black Palace,” which housed a number of famous personalities including muralist David Alfaro Siqueiros, who also painted a mural at the prison.

The festival also includes the award-winning film, “Oso Polar,” a road trip movie about three friends from childhood who relive laughs, hurts, and hates as adults which was shot with an iPhone 5.

Director Marcelo Tobar said the idea to film the movie on a cell phone came by accident, and in an interview with the television program “Excelsior Informa” said when it comes to film his production proves “There is no ‘it can’t be done.’”

It tells the story of two people with nothing in common, but a shared grief over a family member, who bond in the most unexpected ways. It’s described as a deeply moving and very funny celebration of life, new beginnings, and the healing power of telenovelas.

The play first premiered in 2015 Guevara explained and added she was, “Excited to produce the West Coast premiere of it at New Village Arts, as part of the Teatro Pueblo Nuevo initiative designed to put the Latinx narrative center stage.”

“The play’s themes of grief, loss, and family are universal, but the magic of the telenovela coming to life and offering healing, humor and understanding offered that bit of magic that I love to explore as a theatre-maker,” Guevara said.

Teatro Pueblo Nuevo (TPN) is New Village Art’s bilingual bicultural community outreach initiative created to honor Latinx culture and history in North County, which began its programming last year. It was spearheaded by Guevara who was featured in the San Diego Union Tribune as a “rising local theatre force.”

TPN’s first main stage production was in January of this year, CLOUD TECTONICS by Jose Rivera, and was met with critical acclaim. Herbert Sigüenza, co-founder of Culture Clash and voice of Pixar’s COCO, directed the show, and Nadia Guevara starred in the play.

A complete list of the dates and times of the play’s performances can be found on the New Village Arts website at http://www.newvillagearts.org. Ticket prices range from $33 to $36.

In the North County, the Fallbrook Library presents an exhibit with original artwork around the theme of “Sanctuary,” showcasing the works of Latino artists from Los Angeles and Tijuana.

Carol Zaleski, a member of the Friends of Fallbrook Library Board of Directors, said the exhibit addresses finding a safe place, a sanctuary, “In these times when violence and fear threaten many people in many parts of the world.”

The exhibit explores the political and social climate of fear that exists today in many countries because of war and conflict, and is forcing people to leave their homes, seek refuge and find sanctuary. It has been shown in other parts of California, including Pomona and Pasadena.

A reception will be held Friday, October 19, 2018 at the Fallbrook Library from 6 p.m. to 9 p.m. to honor and meet the artists. Musica Sin Fronteras will perform Latin American music.

Food will also be provided. The exhibit is free to the public and runs through November 2, 2018.

Mario A. Hernandez, with LA Plaza de Culturas y Artes in Los Angeles and who was one of the curators of the exhibit said, “We chose to do a Latinx art exhibit with the Sanctuary theme in mind, because of the urge for artists to communicate and express current unfair political/global issues.”

“Through art, artists speak their minds and project their response to injustice. An art composition may communicate so many messages without saying a word.”

Recently, Oceanside Unified School District (OUSD) students at Cesar Chavez Middle School were allowed to create a board game on migration as part of a class project that was approved by an OUSD teacher that the community considered as cruel, hurtful, and humiliating.

This board game called “Deportation Time”, consisted of student players competing against each other to cross the U.S. border and reach a U.S. flag, while deporting each other during the game. The format of the board game makes serious issues, such as historically racist policies, appear apolitical and entertaining while simultaneously making a mockery out of the social conditions that migrant working families face in the community.

Many children in the Oceanside district come from mixed status families and have been hurt by the policies and practices that tear apart families and separates children from their parents by forceful physical removal from the communities in which they live.

According to members from the Human Rights Council of Oceanside (HRCO), MEChA de MiraCosta College, and other community members, this board game reinforces a culture of competition instead of solidarity and teaching teamwork, makes white supremacist political practices and policies seem humorous and innocent.

“The community sees this game as part of a systematic problem, there is a record of other incidents. Many of the HRCO members were OUSD students and we want to know what is this school district doing for the community,” said HRCO member, Karen Plascencia to La Prensa San Diego. “We don’t have anything against the teacher, or anything against the board game, we see this situation as a bigger problem.”

A group of community members went to the OUSD board meeting held last week, and asked for five demands so there isn’t another situation similar to the creation of “Deportation Time.”

The demands include staff development in the form of an annual mandatory Cultural Sensitivity Training for all OUSD teachers to be implemented, and provided by a non-profit organization. Another demand is that the superintendent must hold an annual public forum where the community can participate in open dialogue.

Also, all agendas and board meeting minutes must be provided in Spanish in conjunction with the release of the general agenda and minutes, with board meeting interpreters proficient in Spanish.

The demands also include a teacher committee on ethnic studies to be formed under the initial guidance of consultants recommended by the Statewide Ethnic Studies Now Coalition.

Lastly, the demands include that Know Your Rights informational forums are held on OUSD campuses to be advertised to all OUSD families, prioritizing those directly impacted by this issue in conjunction with programs like ELD and Migration Education.

HRCO, MECha de Miracosta, and other community members will gather with OUSD superintendent to talk about the five demands, on Monday, Oct. 29.