Mr. Kelly, a retired Marine general and former commander of United States Southern Command, which oversees military operations in Central and South America, has made the case that American aid is vital to helping the region cope with its drug and economic problems, thus preventing an even larger flood of migration to the United States.

Democracy is off limits for Trump and company… 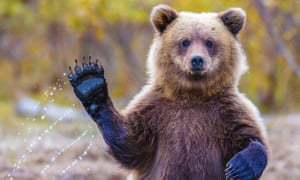 In a confidential document obtained by the Guardian, officials say releasing records could have a ‘chilling effect’ on their deliberations

The Trump administration is moving to restrict the release of information about its decisions on endangered species, according to a confidential internal document obtained by the Guardian.

It comes as wildlife advocates and scientists accuse the government of attempting to weaken protections for wildlife, including wolves, grizzly bears and sage grouse, while boosting domestic energy production and mining in crucial animal habitat.

The country’s future military cooperation with Australia has become an open question after Scott Morrison discussed the possibility of moving Australia’s embassy in Israel to Jerusalem, writes David Lipson.

As Seminole County prosecutors seek the death penalty against Clemente Javier Aguirre-Jarquin a second time despite substantial evidence implicating another suspect, the Florida judge who initially sentenced Aguirre-Jarquin to death now says he should not be convicted. Retired Judge O.H. Eaton (pictured), who presided over Aguirre-Jarquin’s double-murder trial in 2006, said he now believes that the case is a “poster child” for the flaws in the death penalty system. “The evidence I heard during the trial [in 2006] substantiated the verdict,” Eaton told the Orlando Sentinel. “The evidence I’ve heard now does not. … If I knew then what I know now, I probably would have ordered the jury’s verdict overturned.”

Aguirre-Jarquin, an undocumented Honduran immigrant, was convicted of murdering his next-door neighbors, Cheryl Williams and her mother Carol Bareis, who were stabbed more than 130 times. Eaton imposed death sentences for both murders, based on non-unanimous 7-5 and 9-3 jury recommendations for death. Aguirre-Jarquin’s post-conviction lawyers later discovered that the mentally ill daughter and granddaughter of the victims, Samantha Williams—who had provided eyewitness testimony against Aguirre-Jarquin—had confessed to at least five different people that she had killed her relatives. She told one person: “I’m crazy, I’m evil and I killed my grandmother and my mother.” DNA results from blood evidence at the crime scene also implicated Williams. The Innocence Project, which assisted in Aguirre-Jarquin’s post-conviction representation, found that “[n]one of the DNA found on the 84 items that were tested matched Aguirre,” but was a match to Williams and the two victims. Eight bloodstains from Williams were found in four different rooms, each, the Innocence Project said, ”inches away from the victims’ blood.” Based on this evidence, the Florida Supreme Court in 2016 unanimously overturned Aguirre-Jarquin’s conviction. Seminole County prosecutors nonetheless decided to retry Aguirre-Jarquin, simultaneously arguing that Williams’s mental health problems make her confessions unreliable, but relying upon her testimony against Aguirre-Jarquin in his 2006 trial. They also argue that Aguirre-Jarquin—who says he went to his neighbors’ home to get beer, found their bodies, and tried to revive them—attempted to hide clothing with the victims’ blood on it, and did not call police after discovering his neighbors had been killed. Aguirre-Jarquin said he did not call the police because he feared deportation because of his undocumented status.

Florida has more death-row exonerations than any other state, with 27. Ninety percent of those exonerations came in cases in which one or more jurors had recommended a life sentence.

Ha’aretz Israeli newspaper on Thursday  reported that about 30 graves were vandalized two weeks ago in the cemetery of Beit Jmal monastery near Jerusalem.

The monastery monks discovered the destruction of the tombs yesterday, saying the concrete crosses on the graves were taken down.

The old cemetery is located about half a kilometer from the monastery building, so people do not visit it often. After the monks discovered the vandalism, monastery officials filed a complaint with the Israeli police.

In an interview with Haaretz, Father Antonio Scududo estimated that this work took time, effort and even the use of tools, because all the crosses were cast concrete. “I do not know who did it, as it seems,” he said.

For its part, the Christian Islamic Commission for the support of Jerusalem and holy sites today condemned  the attack on the cemetery of the monastery, desecration of the sanctity of graves and religious symbols inside the cemetery, and breaking the tombstones and the number of 27 crucifix concrete.

Like Loading...
News
Federal prosecutors announced the plea agreement Thursday and said the company faces a fine up to $100 million. Bumble Bee Foods last year pleaded guilty to the same charge and paid a $25 million fine. After being blocked at the border and detained for several days, US student Lara Alqasem will now be allowed to enter Israel. She’d been stopped due to her past support for a pro-Palestinian boycott campaign.

Why should he? Just to satisfy people who want to sell ads and pretend to be fair and democratic? With less than three weeks before Election Day, Gov. Andrew M. Cuomo has still not agreed to debate his Republican challenger, Marcus J. Molinaro.

A wink and a nod from Washington is the worst possible response to Riyadh’s butchery.

A photograph of the aide is one of the most striking pieces of evidence to date linking the disappearance of Jamal Khashoggi to the crown prince.