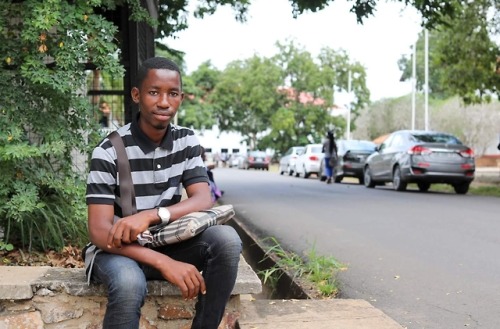 “My mother had a lot of problems in her life, so I grew up without her.  It was a difficult childhood.  Everything that I’ve accomplished came from the kindness of others.  My first angel was my grandmother, who let me live with her.  My second angel was my first grade teacher.  Her name was Madam Felicia.  I had no confidence when I met her.  I thought I was dull because I never did well on my examinations.  But she saw greatness in me.  She taught me how to study and think.  Then in fourth grade I met my third angel, Madam Faustina.  She was also my teacher.  After hearing my story, I think she decided to take me as her son.  She promised to support me as long as I worked hard.  She grew me up.  She taught me the Bible.  She paid for my books and school fees.  I’m in university now, but even yesterday she called to see if I needed anything.  I’m currently studying to be a lecturer.  I’m taking three different majors.  I want to help people.  It’s only natural because of all the people who helped me.  I feel like there are so many people out there who can do great things, but are doomed unless they find someone to help them.”
(Accra, Ghana)

When I wrote my New York Times op-ed in August about the prison strike, I was mildly surprised it was accepted so easily because I figured that someone who was actually an expert in prison labor would have published something better like this instead. I’m not even LGM’s resident expert on such issues, as I have no doubt Simon is far more familiar with the details of the issue over the years than I am. In fact, I got a few e-mails from people asking about the scholarly literature on this, assuming I was a historian on prisons. But I had nothing to give them, as I don’t know that literature at all. It’s an understandable thing for people to think because usually, scholars publish in the public sphere about their expertise, not as activists who just think something is wrong.

Anyway, even though the strike ended a month ago, here is an in-depth discussion of the history of prison labor from someone who knows a lot more than I do about it.

A few years after the Civil War ended, Samuel Lawrence James bought a plantation on a sleepy bend of the Mississippi River in Louisiana’s West Feliciana Parish. It was known as Angola, named for the country of origin of many of the people who were once enslaved there. Before the war, it produced 3,100 bales of cotton a year, an amount few Southern plantations could rival. For most planters, those days seemed to be over. Without slaves, it was impossible to reach those levels of production.

But James was optimistic. Slavery may have been gone, but something like it was already beginning to come back in other states. While antebellum convicts were mostly white, 7 out of 10 prisoners were now black. In Mississippi, “Cotton King” Edmund Richardson convinced the state to lease him its convicts. He wanted to rebuild the cotton empire he’d lost during the war, and, with its penitentiary burned to ashes, the state needed somewhere to send its prisoners. The state agreed to pay him $18,000 per year for their maintenance, and he could keep the profits derived from their labor. With the help of convict labor, he would become the most powerful cotton planter in the world, producing more than 12,000 bales on 50 plantations per year. Georgia, whose penitentiary had been destroyed by Gen. Sherman, was leasing its convicts to a railroad builder. Alabama had leased its convicts to a dummy firm that sublet them for forced labor in mines and railroad-construction camps throughout the state.

There was no reason Louisiana couldn’t take the same path. Black Americans were flooding the penitentiary system, mostly on larceny convictions. In 1868, the state had appropriated three times as much money to run the penitentiary as it had the previous year. It was the perfect time to make a deal, but someone beat James to it. A company called Huger and Jones won a lease for all of the state prisoners. Barely had the ink dried on the contract before James bought them out for a staggering $100,000 (about $1.7 million in 2018 dollars). James worked out a 21‑year lease with the state, in which he would pay $5,000 the first year, $6,000 the second, and so on up to $25,000 for the 21st year in exchange for the use of all Louisiana convicts. All profits earned would be his. He immediately purchased hundreds of thousands of dollars of machinery to turn the state penitentiary into a three‑story factory. One newspaper called it “the heaviest lot of machinery ever brought in the state.” The prison became capable of producing 10,000 yards of cotton cloth, 350 molasses barrels, and 50,000 bricks per day. It would also produce 6,000 pairs of shoes per week with the “most complete shoe machinery ever set up south of Ohio.” The factory was so large that the Daily Advocate argued it would stimulate Louisiana’s economy by increasing demand for cotton, wool, lumber, and other raw materials.

In 1873, a joint committee of senators and representatives inspected the Louisiana State Penitentiary and found it nearly deserted: “The looms that used to be worked all day and all night, are now silent as the tomb.” The warden and the lessees were not at the prison. “It is pretty difficult to find out who are the lessees or, indeed, whether or not there are any,” the inspectors wrote in their report. Where were the convicts? Almost as soon as James’ prison factory was running, he’d abandoned it. He’d discovered that he could make a lot more money subcontracting his prisoners to labor camps, where they were made to work on levees and railroads. A convict doing levee and railroad work cost one‑twentieth the labor of a wage worker.

Some in Louisiana’s Reconstruction legislature tried to rein in James. In 1875, it forbade convict labor from being used outside prison walls—senators and representatives were concerned it would deprive their constituents of jobs—but James disregarded the ban and kept his labor camps going. A Baton Rouge district attorney sued James for nonpayment of his lease. James ignored him and made no payment for the next six years. He had become untouchable.

You might like to think this whole system has changed a lot for the better in the next 143 years, but not so much. Here’s an example I discovered after the Times piece came out. In 1994, Oregon voters passed a ballot measure forcing state prisoners to work 40 hours a week. This wasn’t even close–71% of voters said yes. Shortly after, Eugene’s Sacred Heart Hospital broke its laundry contract with a union firm and hired prisoners instead. To my knowledge, the law is still on the books. Our use of prison labor from no or next to no compensation is not only immoral and racist, it is also dumb, as our hatred of prisoners undermines our own ability to make a decent wage.

With his still steady hands, Anthony Mancinelli has cut generations of hair, and styles. His secret to longevity? Putting in a satisfying day’s work, he said.