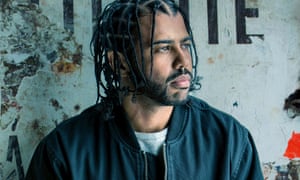 He’s the star of TV and Broadway whose new film Blindspotting unveils the evils of gentrification. The actor discusses protest, prejudice and the ‘neo-Nazi president’

Daveed Diggs, born poor and “very happy” in Oakland, California, says his Jewish mother and African-American father informed him early on that he was going to be policed differently than many of his friends. Regardless of the success he has had of late – including his double-star turn as both Marquis de Lafayette and Thomas Jefferson in Hamilton’s original Broadway cast – the 36-year-old says that fear is still “always there”. Growing up, he was never as aware of the imbalance as when he was around some of his more reckless white friends, a burden he compares to “a weight on my shoulders, a kind of disability that wasn’t shared by them”.

“I got pulled over the first time, five days after I got my driver’s licence, I was 16,” says Diggs. “My car was surrounded by four police cars, one of them walking up to the door with his hand on his gun. Because I had forgotten to turn my lights on and I was driving at night.” Over three years in his 20s, he was pulled over 36 times. “Two days before I left LA to move to New York to work on Hamilton, I got pulled off of my bike and thrown up against a fence by police officers who thought I fitted a description. These events keep happening. It doesn’t change. And so you live with it.”