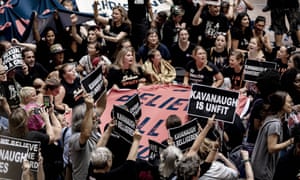 Women are sick of being silenced and controlled. The rage unleashed by Trump’s supreme court pick will not subside

“Do you want to be arrested?” the cop asks Amy Schumer. “Yes” she says simply. She was one of the 302 women held after protesting at a Senate office building against the likely confirmation of Brett Kavanaugh to the US supreme court. They were arrested for “unlawfully demonstrating”. One of the chants in the crowd was: “This is what democracy looks like.” Indeed, this is what democracy looks like when trust in its institutions has been shattered and civil disobedience appears to be the only option. Women’s silence explodes into anger. Anger and disbelief. What does it take to be listened to many asked, after Dr Christine Blasey Ford, the “perfect victim”, gave her testimony in what was a job interview, not a trial.

What does it take to be believed?