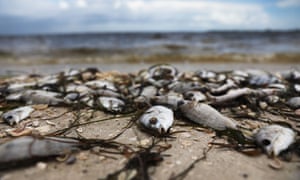 Barely a month ago, Republican Rick Scott held a clear lead in the race to become Florida’s next US senator. Now a tidal wave of toxic algae threatens to engulf the campaign of the outgoing state governor, whom critics have dubbed Red Tide Rick.