German court rules that municipality illegally interfered with freedom of assembly when it blocked BDS event.

Like Loading...
News
Alibaba founder Jack Ma said Tuesday that the trade dispute between the U.S. and China could last 20 years.

even war will not save him

Both newly reported patients belonged to families that refused Ebola vaccination, and one of them died.

How long will it take to walk this back? 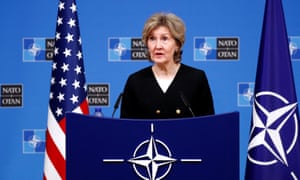 The US ambassador to Nato has warned Russia that if it does not halt the development of a new cruise missile in violation of a treaty between the countries, the US will “take out” the missile.

This is why people laugh at him. 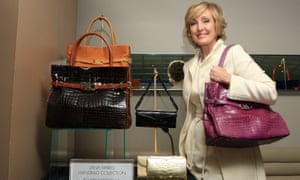 A luxury handbag designer in Palm Beach, Florida, has reportedly been chosen by Donald Trump as the next US ambassador to South Africa.

The appointment of Lana Marks, whose products sell between $10,000 and $400,000, would be likely to cause some surprise: Marks was born in South Africa but has not lived there for more than 40 years.

“This will have an insidious impact on same-sex couples from countries that ban same-sex marriage or only offer civil unions,” the group’s deputy UN director, Akshaya Kumar, wrote. “The US government should recognize, as it had for almost nine years until today, that requiring a marriage as proof of bona fide partnership is a bad and cruel policy, one that replicates the terrible discrimination many LGBT people face in their own countries, and should be immediately reversed.”

Kavanaugh Lied to the Judiciary Committee—Repeatedly:

On Thursday, after listening to testimony from Supreme Court nominee Brett Kavanaugh and his accuser, Christine Blasey Ford, several Republican senators said they would vote to confirm the nominee because it’s impossible to determine which witness—Ford or Kavanaugh—is telling the truth. Actually, it’s easy. We don’t know for certain whether Kavanaugh sexually assaulted Ford. But we do know that Kavanaugh lied repeatedly in his testimony to the Senate Judiciary Committee. Here are some of his lies.

1. “It’s been investigated.” The White House has ignored multiple requests from Democratic senators to authorize FBI interviews with the alleged witnesses in the case. In particular, there has been no FBI or Judiciary Committee interview with Mark Judge, Kavanaugh’s accused accomplice in the alleged assault. In fact, Judge has fled to a hideout in Delaware to avoid being called to testify.

During the hearing, several Democratic senators pleaded with Kavanaugh to call for FBI interviews so that the truth could be resolved. Kavanaugh refused. When Sen. Chris Coons pointed out that the FBI had needed only a few days to complete interviews in the Clarence Thomas–Anita Hill case, Kavanaugh said even that was too much, because the Judiciary Committee had already examined his case. “It’s been investigated,” he told Coons.

No honest judge would say that. None of the alleged witnesses, other than Ford and Kavanaugh, has been interviewed. Instead, the alleged witnesses have issued short statements of non-recollection and have asked not to testify. The committee’s Republican majority, eager to brush the case aside, has accepted these statements and has refused to ask further questions. In his testimony, Kavanaugh falsely claimed that FBI interviews would add nothing. Agents would “just go and do what you’re doing,” he told the senators.

Kavanaugh claimed that a vague statement of non-recollection from Judge’s lawyer was sufficient “testimony.” He dismissed calls for Judge to appear before the committee, arguing that his own testimony was adequate. But Kavanaugh also mocked the committee’s Democrats, who lack the power of subpoena, by telling them to go talk to Judge. When Sen. Patrick Leahy asked whether Bart O’Kavanaugh, a drunken character in Judge’s book, was meant to represent Brett Kavanaugh, the nominee passed the buck to his testimony-evading friend: “You’d have to ask him.”

2. “All four witnesses say it didn’t happen.” Each time senators pleaded for an FBI review or a more thorough investigation by the committee, Kavanaugh replied that it wasn’t necessary, since all the people Ford claimed had been at the gathering where the alleged assault occurred had rejected her story. Eight times, Kavanaugh claimed that the witnesses “said it didn’t happen.” Three times, he said the witnesses “refuted” Ford’s story. Four times, Kavanaugh claimed that “Dr. Ford’s longtime friend,” Leland Keyser, had affirmed that the gathering never occurred.

That’s a lie. Keyser has stated that she doesn’t recall the gathering—she was never told about the attack, and she was supposedly downstairs while it allegedly occurred upstairs—but that she believes Ford’s story. That isn’t corroboration, but it isn’t refutation or denial, either. During the hearing, Sen. Cory Booker pointed this out to Kavanaugh, reminding him that in an interview with the Washington Post, Keyser “said she believes Dr. Ford.” Kavanaugh ignored Booker’s correction. Ninety seconds later, the nominee defiantly repeated: “The witnesses who were there say it didn’t happen.”

3. “I know exactly what happened that night.”  Kavanaugh made several false or widely contradicted statements about his use of alcohol. This is significant because Judge has admitted to drunken blackouts, which raises the possibility that Judge and Kavanaugh don’t remember what they did to Ford. During the hearing, Sen. Richard Blumenthal asked about Kavanaugh’s participation in a night of drunken revelry at Yale Law School. Kavanaugh assured Blumenthal, “I know exactly what happened the whole night.” Later, Booker asked Kavanaugh whether he had “never had gaps in memories, never had any losses whatsoever, never had foggy recollection about what happened” while drinking. Kavanaugh affirmed that he had never experienced such symptoms: “That’s what I said.”

These statements contradict reports from several people who knew Kavanaugh. Liz Swisher, a friend from Yale, says she saw Kavanaugh drink a lot, stumble, and slur his words. “It’s not credible for him to say that he has had no memory lapses in the nights that he drank to excess,” she told the Washington Post. And in a speech four years ago, Kavanaugh described himself and a former classmate “piecing things together” to figure out that they’d “had more than a few beers” before an alcohol-soaked banquet at Yale Law School.

4. “I’m in Colorado.” As evidence that the charges against him were ludicrous, Kavanaugh told the committee that he had been falsely accused of committing an assault more than 1,500 miles away. He claimed that according to his accusers, “I’m in Colorado, you know, I’m sighted all over the place.” But a transcript of Kavanaugh’s Sept. 25 interview with Judiciary Committee staffers shows no claim of an offense in Colorado. The transcript says that according to a woman from Colorado, “at least four witnesses” saw Kavanaugh shove a woman “up against the wall very aggressively and sexually” in 1998. But Kavanaugh was specifically told during the interview that the scene of the alleged incident was in D.C., where he was living at the time.

Kavanaugh also told other whoppers.* He claimed that his high school yearbook reference to the “Beach Week Ralph Club” referred in part to his difficulty in holding down “spicy food.” He claimed that the entry’s jokes about two sporting events he and his high school buddies had watched—“Who won that game, anyway?”—had nothing to do with booze. And he defended his refusal to take a polygraph test on the grounds that such tests aren’t admissible in federal courts—neglecting to mention that he had endorsed their use in hiring and law enforcement.

Maybe Kavanaugh is an honest man in other contexts. Maybe he’s a good husband, a loving dad, and an inspiring coach. And maybe there’s no way to be certain that he assaulted Ford. But one thing is certain: He lied repeatedly to the Judiciary Committee on Thursday. Some of his lies, about the testimony of witnesses and the integrity of investigations, go to the heart of our system of justice. Any senator who votes to put this man on the Supreme Court is saying that such lies don’t matter.

Update, Sept. 30, 2018: This article originally said that Kavanaugh “claimed that his beer consumption in high school was legal because the drinking age in Maryland was 18.” Kavanaugh’s exact words were: “The drinking age, as I noted, was 18, so the seniors were legal, senior year in high school, people were legal to drink, and we—yeah, we drank beer.” These words could imply that his beer drinking at age 18 was legal, which would be false, since the drinking age in Maryland was raised to 21 before he turned 18. Alternatively, they could imply that his drinking at age 17 was understandable, if he was with 18-year-old seniors who were legal at the time. In keeping with the standard applied to others, it’s incorrect to report that Kavanaugh “claimed” his beer consumption that summer was legal. Therefore, the sentences have been removed.

Have lost their way 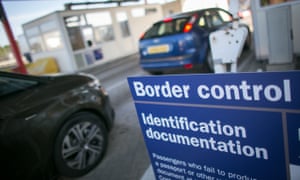 EU citizens will no longer be given priority to live and work in Britain in a radical overhaul of immigration policy after Brexit, Theresa May has said, admitting Britons may in turn have to apply for US-style visas to visit and work in Europe.

The prime minister said the terms of the final deal with the EU could include mobility concessions, but insisted that would be within the control of the British government.