Trying to take heat off of lack of any successful British foreign policy in Europe – complain about former colony that Britain looted! 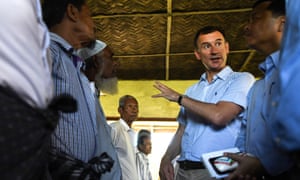 The Burmese generals responsible for atrocities against Rohingya Muslims must be punished for their crimes, Jeremy Hunt has said after a meeting with Myanmar’s de facto leader, Aung San Suu Kyi.

The United Nations should look at all options, including a referral to the international criminal court, the British foreign secretary added.