Giving money away that he will control gets him a get out of jail feee card for being rich and “caring.” But he does not care to pay well or share the his gains with those who did the work that gave him billions. 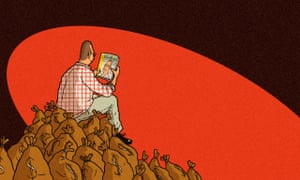 The Amazon boss’s philanthropy fund flies in the face of the way he treats his workers. Yet he wants to be seen as a messiah

Always a pleasure to hear from rejected Paul Verhoeven villain Jeff Bezos, who this week announced an initiative designed to cast him as Earth’s first trillion-dollar sociopath. OK, I’ve paraphrased slightly. The Amazon boss has launched something called the Day One fund, which feels like the will-this-do title for the will-this-do initiative it is. Bezos has long been criticised for his glaring lack of a philanthropic arm, long after he became the richest man in modern history. A year ago Jeff seemed at such a loss as to how not to be an unmitigated arse that he was asking internet users for ideas. He seems to have ignored all the respondents who said, “Stop treating your workers like rubbish.”

Do you remember the beginning of Verhoeven’s Robocop, before things started to go really tits-up in increasingly automated future Detroit? There’s a company that basically does everything, called Omni Consumer Products. They begin providing services that might reasonably be imagined the job of the state. A movie ensues. Anyway, here we are. Fresh from announcing that Amazon’s getting into healthcare, Jeff has decided to help homeless people and low-income communities with donations and not-for-profit schools.