Because current US leadership does not care about deaths it supports. The United States can continue aiding a military campaign in Yemen after the State Department said a Saudi-led coalition is doing enough to minimize deaths.

The Catholic Church in Germany acknowledges a depressing and shameful legacy of sexual abuse after a leaked study says clerics had abused thousands of children over a 70-year period.

Population levels at federally contracted shelters for migrant children have quietly shot up more than fivefold since last summer, according to data obtained by The New York Times, reaching a total of 12,800 this month. There were 2,400 such children in custody in May 2017.

The SWP’s appeal to finally re-evaluate the “War on Terror,” comes at a time when the lack of success of the measures applied, is more obvious than ever. If in the fall of 2001, the objective had been to annihilate Al Qaeda, today, global jihadism has spread. Today, the “War on Terror” is targeting the IS, which had been able to maintain its own state for a period of time. Al Qaeda has also grown stronger. The Al Qaeda offshoot in Syria, alone, is estimated – by the Syrian Observatory for Human Rights – to have up to 30,000 armed fighters. (german-foreign-policy.com reported.[10]) They are benefiting from the appeals made by western powers – including Germany – for Syria and Russia to immediately halt their war. However, the West’s “War on Terror” will not be halted.

Mis-spelling – plotting should be plodding Brexit supporters in the Conservative Party are again making plans to topple UK Prime Minister Theresa May. It remains unclear whether a vote of no confidence would be successful — and who would succeed her.

The Department of Homeland Security denies that the money came from disaster relief accounts and says it is prepared for a hurricane that will hit this week.

The head of the federal Civil Rights Commission, which was crucial in passing the 1965 Voting Rights Act, says voting rights protections are dangerously low.

Leana Wen, who replaces Cecile Richards, won praise for her steadying hand as Baltimore’s health commissioner during the city’s convulsive protests in 2015.

Says lots about them being willing to sleep with Nazis.

Annie Lööf of the Centre party, Ulf Kristersson of the Moderates, Ebba Busch Thor of the Christian Democrats and Jan Björklund of the Liberals.

The leaders of the centre-right opposition Alliance on Wednesday called on the ruling Social Democrats to step aside and help them form a stable government and end the political uncertainty following Sunday’s election.

Christian Democrat party leader, Ebba Busch Thor, one of the four parties in the Alliance, said they have a proper mandate to form a government.

“I think it’s very clear, with the results that we seemed to get from the Swedish electorate, that the Alliance is clearly much larger than the Social Democrats. It’s quite natural that we seek opportunities to form a new government but that we also invite the Social Democrats for talks on very important issues,” Ebba Busch Thor tells Radio Sweden.

Social Democrats leader and prime minister Stefan Löfven later gave his response. He told a press conference that they would not help the Alliance form a government and added that his party, taken together with the Greens and the Left party, had a larger share of support from the electorate than the four centre-right parties. 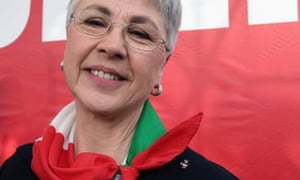 An Italian actor was stopped by police at the Venice film festival for wearing a neck scarf associated with the anti-fascism group Anpi, raising questions in parliament over whether the far-right interior minister, Matteo Salvini, had issued orders against the group.

Ottavia Piccolo was stopped by officers checking bags at an access gate as she headed towards the red carpet area of the Venice Lido at the close of the festival on Saturday.