Cutting off what offends you? Dumb.

A senior Saudi official has appeared to confirm Riyadh’s plans to dig a canal separating Qatar from the mainland, turning it into an island. Qatar has been diplomatically isolated from its neighbors for over a year.

In Chemnitz, refugees find themselves under threat by neo-Nazis and hooligans. Politicians have pledged to take a hard line against right-wing extremist violence, but they look helpless nonetheless. Meanwhile, the right wing seems to have the upper hand in Saxony. By DER SPIEGEL Staff

A business associate of Konstantin Kilimnik, a Russian consultant indicted by the United States, solicited a U.S. citizen to act as straw purchaser to buy Trump inauguration tickets for a Ukrainian oligarch, court documents showed on Friday.

Just about everything that flies of Our Dear Leader’s mouth is ill-thought out or just plain moronic…..his newest batch of stupidity…..

President Trump gave Bloomberg an interview Thursday that was a doozy even by Trumpian standards. Among other things, he insisted he couldn’t be impeached because he is “doing a great job,” defended his controversial handling of John McCain’s death—and threatened to pull the United States out of the World…

Many political attack ads stretch the truth and associations of an opponent to the extreme, but a television ad that began airing locally Wednesday that tried to link Ohio 1st Congressional District candidate Aftab Pureval to Libyan terrorists was an ugly low blow. The ad, funded and produced by a super PAC aligned with Speaker of the House Paul Ryan, is a dog whistle that blatantly attempts to remind voters of Pureval’s “otherness” by making a misleading connection between the Democratic challenger and a settlement negotiated with Libyan terrorists by a law firm where he used to work. Never mind Pureval had nothing to do with the settlement the ad references.

Marquez, who appeared on the series from 1994 to 1997, was killed during a welfare check at her home in California

Then, Mendoza said, she brandished a gun at the officers. The officers opened fire and she was shot in the torso. She later died at the hospital.

The firearm was later identified as a BB gun that resembled a semi-automatic weapon.

I have been trying to track what’s happening in our current tariff war with China.  Politico Morning Agriculture helps a lot, but even so keeping up with the rounds of retaliatory tariff impositions is challenging.

Here is our “second tranche” list of Chinese imports subject to tariffs.

The Chinese are retaliating by imposing tariffs on US agricultural exports.  They publish their lists in Chinese, obviously, meaning that we non-speakers must depend on Google Translate [and see note at end].

Fortunately, CNN Money has published a partial list in English of US goods hit by Chinese Tariffs

Its list leaves out baked goods, for example, items of great concern to BakeryAndSnacks.com.

A group called Farmers for Free Trade has launched an advertising campaign, “Tariffs Hurt the Heartland.”

This is a mess and clearly not good for US agriculture.  President Trump, as I noted earlier, has promised $12 billion in relief.  The administration has not said where that money—which in any case will not be nearly enough—is coming from.

Does anyone know where that money will be taken from?  Which budget line?

Small correction: the annexes you linked in the newsletter should be titled “Annex XX: List of XX% additional tariff items for the United States. pdf ”

Have you wondered why Canada is dragged into this? =)

In Mandarin the character for “additional” is the same as the abbreviated reference to Canada. It’s not surprising that Google Translate failed to catch this.

Cut off at knee! or we will have to refight WW@ 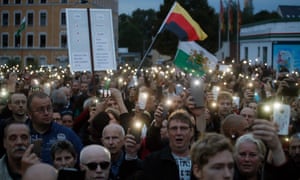 Packing away her metal trays of breads and biscuits in Chemnitz’s Peukert bakery, famous for its century-old recipes, the shop assistant says she is glad it is closing time. Outside, police and protesters are gathering ahead of the latest far-right rally. “We’ve been here before,” she says, pulling down the window blinds and shrugging, saying that the insurers will pay for any damage. “Thirty years ago we also had to tell the state what’s what.”

“It’s just like way back then,” the woman, who declined to give her name, says of the 1989 protests that brought down the communist German Democratic Republic (GDR). “It feels like no one really listens to us ordinary folk, which is why people are on the streets again.”

Democracy only for some, not people who disagree with government or IDF

Israeli soldiers detained senior members of Breaking the Silence and a human rights attorney in an attempt to block a tour of the South Hebron Hills, where settlers attacked six left-wing activists last week.

Breaking the Silence planned a tour in the South Hebron Hills on Friday, as a token of solidarity with the six Ta’ayush activists who were attacked there last week by settlers from the nearby illegal outpost of Mitzpe Yair. But before they could arrive to the tour location, several buses carrying hundreds of participants were stopped and delayed by military forces for over an hour.

The soldiers handed the tour organizers a military order which allows them to restrict who may enter certain areas in the West Bank. As expected, the order applied exclusively to the participants of the tour – settlers can move as they wish in that space. Among the participants were Member of Knesset Mossi Raz, a politician with the left-leaning Meretz party, and former Attorney General Michael Ben-Yair.

About an hour into the delay, the IDF removed the roadblock, and the tour went on as planned. Until the buses arrived at the entrance of the Mitzpe Yair outpost, that is – the same location of last week’s attacks. There, the soldiers confronted the tour participants again, and detained three of them: director of Breaking the Silence Avner Gvaryahu, the organization’s communications director, Achiya Schatz, and human rights attorney Michael Sfard.

One of the tour participants said: “On our way to Mitzpe Yair, a military jeep stopped us and would not let us pass. We got off the bus, and a few minutes later another jeep arrived with military officers who said that this was a closed military zone, and that we must quickly board the bus again and leave. Obviously, it was not quick – we waited while lawyer Michael Sfard and Avner Gvaryahu stepped aside to speak with the military officers. Suddenly, another jeep arrived with border police forces, and their commander decided to detain Avner and Achiya. He selected them one after the other, without an apparent reason why.”

“When we tried to leave the place, the bus could not make a turn because of the narrow access road. Security forces then decided to strip the Palestinian bus drivers of their licenses, and give them tickets for entering a road they could not get out of – except they could not drive us out because the military was blocking their access. There were large police and security forces, and at some point, settlers arrived and started cursing the soldiers,” the witness added.

Ta’ayush activists spotted at least two of the facilitators of last week’s attacks among the group of settlers who arrived at the scene.

Breaking the Silence provided the following response: “The detention of the organization’s executive director and director of the communication department, as well as the detention of attorney Michael Sfard during a tour of South Hebron Hills should concern every Israeli citizen who cares about democracy, freedom of speech and the right to protest. In conducting these detentions at a tour meant to protest the violent settler attacks on Ta’ayush activists last week, Hebron police and the Hebron military commander rewarded settler bullies. This is proof, yet again, of the unfortunate fact that the military in the occupied territories has become a force that serves settlers, who ultimately control what happens on the ground.”

The lobbyist, Sam Patten, worked for a pro-Russia Ukrainian political party, the same one that employed Paul Manafort.