The power of seeing one priest’s name on a list.

But this hunt is neither about managing a wildlife population that has exceeded the carrying capacity of its habitat, nor about putting healthy food on the table. Instead, this hunt is about what the great conservationist and thoughtful hunter Aldo Leopold, called a “certificate” — a trophy proving that it’s owner has “been somewhere and done something.” In the case of killing a grizzly, it means you’ve done something that has been considered difficult and dangerous. And it was, when you were hunting with a spear. But anyone who has shot a high-powered rifle knows that knocking off a grizzly bear is no more than an exercise in marksmanship, like shooting an elk. The difference is, you eat the elk. Grizzly bears are not hunted for their meat. Wyoming’s hunting regulations make this clear. If you shoot what’s called a “big game animal” in Wyoming, like an elk, a deer or an antelope, you’re legally bound to bring all the edible portions of the animal out of the field. But if you shoot what’s called “a trophy animal,” like a mountain lion, a black bear and, now, a grizzly, all you have to bring out is its skull and pelt. 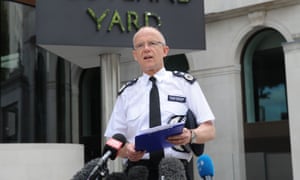 The UK has not “woken up” to the threat posed by the far right, the former head of the Metropolitan police’s counter-terrorism unit has said.

Mark Rowley urged politicians, the media and communities not to underestimate the threat of far-right groups, citing how National Action, a proscribed neo-Nazi organisation, has “a strategy for a terrorist group” with online materials advising on how to sow tension and discord in communities and evade police surveillance.