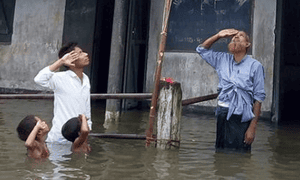 Nine-year-old, but not his mother, left off list of citizens published in Assam crackdown

A child who appeared in a photograph that went viral last year saluting the Indian flag in chest-deep flood water has been declared a foreigner and could be deported as part of a government drive to root out illegal immigrants.

Haider Ali Khan appeared in a photograph with his teacher and two others on 15 August last year, India’s 70th independence anniversary, showing the group saluting the Indian tricolour.